Ride of the Century: St. Louis Cops Aim to Fight "Reckless Behavior," 2013 May Be Final Ride 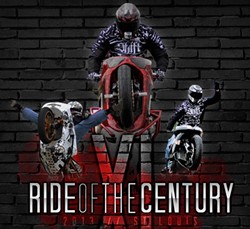 The upcoming Labor Day weekend plays host to numerous festivals and events, but Ride Of The Century is the only one the police are holding a press conference about. Videos of last year's ride drew enormous attention, from the dead-tree media to the social newsgathering site Reddit, which featured a helmet cam video on it's front page of a motorcycle rider breaking a police blockade like a bat out of hell.

The event runs August 30 to September 1, but this year the cops are making the first move to announce the "combined efforts" of the metro police department, the city of St. Louis, the county police department and the Missouri State Highway Patrol "to combat reckless behavior of motorcyclists during the 'Ride of the Century' motorcycle event in St. Louis," a press release states.

The release quotes St. Louis Metropolitan Police Chief Chief Sam Dotson decrying motorcyclists who "demonstrate incredibly poor judgement and hazardous behavior, putting not only themselves in danger, but risking the safety of law abiding citizens." A police spokeswoman tells Daily RFT that an invitation was extended to members of Streetfighterz -- "St. Louis' Original Stunt Team" -- the group that created Ride of the Century more than a decade ago. 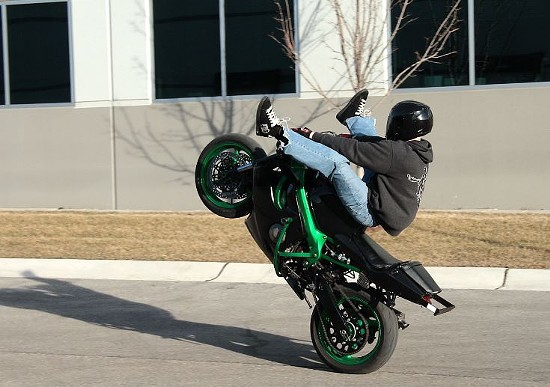 Daily RFT reached out to Streetfighterz, and Adam, a founding member of the group who requested his last name not be printed, says that police pressure on the event has gotten so intense that the 2013 Ride of the Century will effectively be the last ride of its kind in St. Louis.

"The Streetfighterz will continue," Adam says. "The Ride of the Century, maybe in its current format, has seen its final days." He stressed the point that Streetfighterz can't control what individual riders do, but the liability of fronting the event combined with police pressure has become too much. He says the group plans to send a representative to the press conference this afternoon.

Daily RFT will have more on this story soon, so stay tuned! In the meantime, below are two videos of last year's Ride of The Century, and you can read the full text of the press release on the next page.

Continue for the full announcement from police officials.

On Wednesday, August 28, 2013, the Metropolitan Police Department, City of St. Louis, St. Louis County Police Department and the Missouri State Highway Patrol will announce at a press conference combined efforts to combat reckless behavior of motorcyclists during the "Ride of the Century" motorcycle event in St. Louis.

During the weekend of August 30 to September 1, 2013, hundreds of motorcyclists will converge in the St. Louis region. In past years, participants have been known to block highways, travel the wrong way on roadways drive erratically to evade law enforcement while completing dangerous stunts. Stunts are commonly preformed in the middle of both vehicular and pedestrian traffic areas, with no regard for traffic laws or signals, and create dangerous driving conditions and often cause automobile accidents. Participants commonly flee from officers.

"At past "Ride of the Century" events, motorcyclists have demonstrated incredibly poor judgment and hazardous behavior, putting not only themselves in danger, but risking the safety of law abiding citizens," said Chief Sam Dotson. "This type of behavior will not be tolerated and violators will be cited or arrested."

St. Louis County Police Chief Tim Fitch added, "St. Louis County officers will be vigilant in our efforts to ensure that citizens can safely travel the streets and that all motorcyclists participating in illegal and hazardous activity will be penalized."

Captain Ronald Johnson of the Missouri State Highway Patrol states, "Citizens and visitors travelling on Missouri highways can be assured that this combined effort will focus on maintaining uninterrupted traffic flow and focusing on the safety of motorists."

Working with law enforcement agencies throughout the region, we will coordinate efforts to ensure motorists remain safe on roadways during the event.

Send feedback and tips to the author at danny.wicentowski@riverfronttimes.com