Just a few days after writing a Facebook post hinting at some sort of imminent exposé on his former bosses, fired KMOV-TV (Channel 4) anchor Larry Conners has filed a petition for damages against the news station -- arguing that his employers conspired to defame him and lied to the media in the process.

The petition outlines the comments that officials with KMOV and parent company Belo Corporation made in the aftermath of Conners' controversial Facebook post on the IRS, which ultimately led to his termination.

Since his departure from KMOV in May, the veteran St. Louis newsman has taken multiple legal actions against the station, arguing that he was wrongfully terminated, that he was the victim of discrimination and that his employers had been looking for a reason to fire him for years.

The station, meanwhile, says that it had long-term plans to keep Conners on board, but that the IRS commentary -- a post on his KMOV Facebook page questioning whether the agency had targeted him in retaliation for an Obama interview -- violated journalistic standards. That is the sole reason for his firing, KMOV argues. 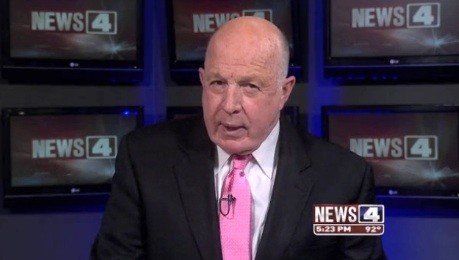 Most recently, Conners has gotten attention for a dispute regarding a non-compete clause in his contract, which he says is blocking him from working in the industry for a full year.

And now, he is demanding that he be awarded damages "because of Defendants' intentional and malicious conduct."

Until December, 2012, he had always been the anchor person for the premium and most watched news broadcast at 10:00 p.m. each weekday evening. He had a great reputation in St. Louis, and enjoyed a very high degree of respect. His ratings and audience viewing were consistently superior to all other 10:00 p.m. news broadcasts. He was the recipient of numerous Emmy Awards....

Plaintiff's reputation in the community, as both a news broadcaster, television personality, and honorable and honest person, was the highest and as unblemished as possible.

Plaintiff was well known in the community and extremely popular, and participated in many outside and charitable events. He is recognized wherever he goes.

That all changed, the petition says, when his employers began lying about him in public statements.

After the IRS commentary -- which the petition emphasizes was not an opinion -- Pimentel gave false statements to the press that Conners was violating "important journalistic standards," the filing says. He also references comments from Belo's vice president to BuzzFeed calling Conners' comments "inappropriate."

The explanation KMOV-TV gave for Conners' firing was a pretext for the station's intent to replace him with a younger person, the petition alleges.

"The statements made by Defendants and their agents...were false and defamatory in nature, and published by Defendants, with Plaintiff clearly as the sole target of the defamation. All Defendants and [Belo vice president] Michael Valentine conspired to defame Plaintiff to provide an excuse for the termination of his employment agreement and his discharge from KMOV-TV, and to prevent him from employment by any competitor under a one year non-compete provision," the petition continues.

Daily RFT left a message with Pimentel this morning. We'll update if we hear back.