A federal judge is ensuring that Stanley "Outlaw" Carter's nickname remains relevant for many years to come.

Officials announced this morning that Carter, a 29-year-old St. Louis city man, has been sentenced to twenty years behind bars for two felony counts of brandishing and discharging a firearm as part of drug trafficking crimes. Carter will have to serve this sentence consecutively to his not-yet-completed sentence from the St. Louis Circuit Court for a 2008 shooting.

The announcement comes four months after Carter -- allegedly a member of the violent "Dip Set" gang -- pleaded guilty to the federal crimes.

On March 26, 2008, federal prosecutors say, he and his co-defendant Antonio "Lips" Shaw and accomplice Richard "Repeat" Bobbitt, entered a city residence with their guns drawn. At the time, the home was occupied by a ten-year-old girl, a teenage boy and the children's mother.

The three men stole a "significant amount of marijuana" from the home and fled.

Then on May 10, 2008, Carter used an "AR-15 assault-style rifle" to kill two men associated with a rival group, prosecutors say. 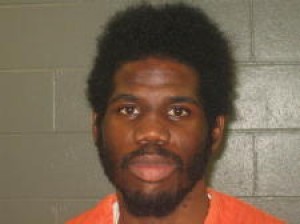 The two were inside a vehicle when Carter approached and apparently "opened fire from point-blank range."

This shooting happened at the area often called "the circle," near 1199 Riverview Boulevard in the Baden neighborhood in north St. Louis.

The first victim, Adolph Ellison, was pronounced dead on the scene and the second, Donald Mack, died a short while later. Immediately after the shooting, Carter and his accomplices fled and took steps to try and conceal evidence, prosecutors charged.

Shaw, 26, was previously sentenced to over 31 years of imprisonment on one felony count of conspiracy to possess with intent to distribute pot and crack along with a second drug trafficking firearm felony charge. He was convicted by a jury earlier this year.

The sentence imposed today by United States District Court Judge Henry E. Autrey marks the close of the federal investigation into the violent criminal activity perpetuated by the so-called Dip Set group, according to the U.S. Attorney's Office for the Eastern District of Missouri.