The fight to allow hundreds of registered sex offenders in Missouri to have their names cleared is heating up again -- with loud opposition from Governor Jay Nixon, St. Louis Metropolitan Police Officials and victims' rights advocates.

Nixon, a Democrat, last month vetoed legislation that would rewrite state law regarding sexual offenses and sexually violent offenders -- most notably removing about 870 sex offenders from state and county notification websites. That was, it turns out, not the end of the discussion. As is the case with a handful of bills Nixon rejected this session, lawmakers in the Republican-led legislature are now working to override his veto of the offender registry reforms, and the governor -- with support from a range of stakeholders -- is pushing back.

"The leadership of the House may be ready to help violent sex offenders hide from the public and law enforcement, but their victims, and the millions of Missourians who use these websites to help keep their families safe, are not," Nixon says in a statement.

See also: Is The Missouri Sex Offenders Registry Too Broad?

The police department says it supports Nixon in the "fight to protect our community against sexual offenders and protect the rights of crime victims!" 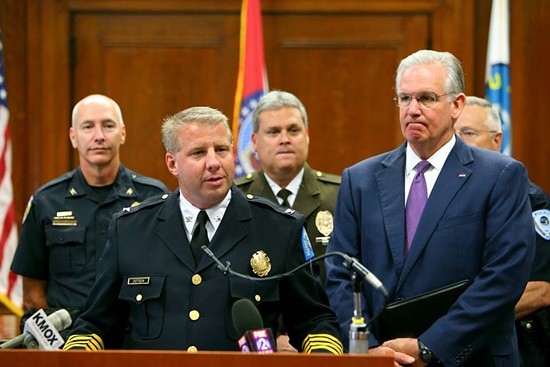 The governor's office argues that, as written, the legislation, House Bill 301, would allow individuals who committed sex offenses as juveniles to have their names taken off of the state and county notification sites -- and also prevent any individual in that category from being placed on these registries in the future. One problem, Nixon says, is that the bill does not take into account the seriousness of the offense, such that even a juvenile guilty of forcible rape could get off the list.

Additionally, he says, "This legislation would also deny local prosecutors and victims of these horrible crimes the opportunity to be heard before an offender is removed."

Last month, after Nixon's veto, we interviewed State Rep. Kevin Engler, the Republican sponsor of the bill, who argues that the list is ineffective if it also includes minor offenders who are not dangerous or a risk to society. The registry, he says, is way too broad and lumps together offenders who committed incredibly heinous crimes with those who may be guilty in a statutory case (involving, for example, a consensual relationship between an eighteen-year-old and a sixteen-year-old).

This morning, the Survivors Network of those Abused by Priests (SNAP), a local victim's rights advocacy group, fired off a statement announcing its opposition to the bill as well, saying, in part:

It's very sad when someone who has committed a crime is excessively punished. It's even sadder, however, when someone who is innocent is victimized needlessly. Taking offenders' names off the registry could easily lead to more assaults against children. We should think long and hard before making that kind of change.

The group argues that there is not enough independent scientific research to determine whether these changes will do anything to protect more children.

The Post-Dispatch has an interview today with the fiancé of a man arrested for child pornography when he was a teen. She argues that it's unfair he will have this label for the rest of his life for a mistake he made years ago.

The legislature may push to override Nixon next month.

Here's the full bill, followed by the governor's veto message.

And here is SNAP's full statement.

Missouri lawmakers want to suddenly remove hundreds of names of convicted criminals from the state sex offender registry. We oppose this move.

When pondering changes to the sex offender registry, there should be only one criterion: will the proposed change protect more children? And in this case, it's just too early to tell. So we in SNAP favor keeping the registry unchanged until independent scientific research clearly shows a need to change it.

Remember: Studies suggest that between 8% and 12% of kids will be sexually assaulted. (According to Darkness to Light, "there will be 400,000 babies born in the US this year that will be sexually abused before they turn 18 if we do not prevent it.") We must put the well-being of thousands of children ahead of the inconvenience of dozens of offenders.

Decision-makers are adults. Most of them were never molested. So they naturally and instinctively sympathize with other adults. That sympathy leads some lawmakers to give some who have hurt kids a break.

But sympathies alone don't make good public policy. We must examine both our feelings and the facts. And the facts tell us we should err on the side of safeguarding children.

It's very sad when someone who has committed a crime is excessively punished. It's even sadder, however, when someone who is innocent is victimized needlessly. Taking offenders' names off the registry could easily lead to more assaults against children. We should think long and hard before making that kind of change.

Who's on the sex offender registry should be based on likelihood of re-offense, not on some arbitrary age.