On Friday, we reported on a tragic shooting in the Penrose neighborhood in which a twenty-year-old man allegedly killed his fifteen-year-old sister in an accidental shooting. Police Chief Sam Dotson immediately cited the incident as further evidence that stronger gun control is needed, noting that the suspect is mentally challenged. It's unclear what exactly his disabilities are, but Marcus Anderson is facing charges in the death of his teenage sister, Alicia.

The St. Louis Circuit Attorney's Office has issued a warrant for second-degree involuntary manslaughter against Anderson, who remains behind bars with bond set at $20,000.

There aren't a lot of details yet on how he ended up killing his sister, but it appears he may have thought the gun was a toy.

Here's Dotson's initial tweet on the matter, which came a day after he spoke about the need for stricter gun laws at a St. Louis City Hall rally:

Today @slmpd responded to an unfortunate call. A mentally challenged man accidentally shot his sister. This is why gun control is important.

At that Wednesday evening rally -- full remarks available here -- Dotson argued for gun reforms with a car analogy, saying, "All I ask with respect to guns is that we start treating them with half as much caution as we treat cars. If people want to own a gun, they should be required to submit proof of identity and pass a basic background check."

Dotson hasn't offered any additional commentary on the shooting incident involving the Anderson family other than to say, "This is why gun control is important."

The official police report says that when officers arrived, the girl had been shot in the head and was already deceased. Cops found her brother by the firearm -- and he was immediately detained. 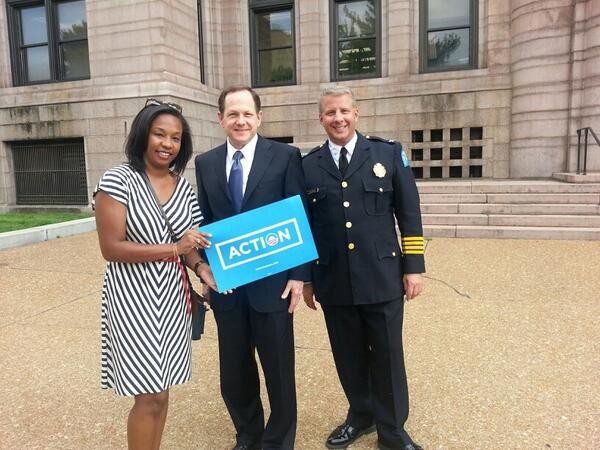 The shooting happened on the 4600 block of San Francisco Avenue.

As we noted in our earlier coverage, the family had recently moved into that home and the weapon, a 20-gauge shotgun, may have belonged to a friend. It was reportedly hidden behind a dresser and spray-painted gold -- which is why he might have thought it was a fake.

The siblings' mother apparently told police that she had tried to hide the gun behind the dresser and court documents say Marcus' sisters told him to stop playing around with the gun, but that he pointed it at Alicia's head and fired.

Incident: Homicide
Location: 4600 block of San Francisco
Date/Time: 8/22/13 @ 13:22
Victim: Alicia Anderson, 15-year old black female of the 4600 block of San Francisco
Suspect: 20-year old black male
Officers responded to a call for a shooting and upon arrival, located the victim lifeless. The suspect, who is the victim's brother, was found in close proximity of the firearm and was detained pending further investigation. The firearm was recovered. The victim suffered a gunshot wound to the head and was pronounced deceased on the scene. The investigation is ongoing.