Mentally Challenged Man Kills Teen Sister: "This Is Why Gun Control Is Important" 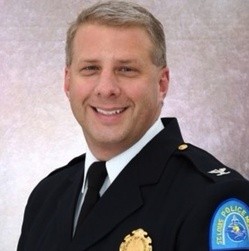 "Today [police] responded to an unfortunate call," he says. "A mentally challenged man accidentally shot his sister. This is why gun control is important."

Today @slmpd responded to an unfortunate call. A mentally challenged man accidentally shot his sister. This is why gun control is important.

Dotson has been a loud proponent of stricter gun policies since he first stepped up as chief in January.

Police say the shooting happened yesterday afternoon at the 4600 block of San Francisco Avenue in the Penrose neighborhood. The suspect, brother of victim Alicia Anderson, was apparently found "in close proximity of the firearm and was detained pending further investigation."

The girl had been shot in the head and was pronounced dead on the scene.

The Post-Dispatch reports that the family had recently moved into the home and that the gun belonged to a friend of the family. It was allegedly hidden behind a dresser -- and spray-painted gold.

He may have thought it was a toy.

It's unclear what the suspect's mental disabilities may be -- or whether police will press charges.

Incident: Homicide Location: 4600 block of San Francisco Date/Time: 8/22/13 @ 13:22 Victim: Alicia Anderson, 15-year old black female of the 4600 block of San Francisco Suspect: 20-year old black male Officers responded to a call for a shooting and upon arrival, located the victim lifeless. The suspect, who is the victim's brother, was found in close proximity of the firearm and was detained pending further investigation. The firearm was recovered. The victim suffered a gunshot wound to the head and was pronounced deceased on the scene. The investigation is ongoing.

And from Dotson's blog, his full gun control remarks from the Wednesday night rally.

It would be the easiest thing in the world for me to keep silent on this issue, but it wouldn't be the right thing. As a police chief, nothing requires me to make public comments about controversial issues like gun control. Nothing except my conscience; which in this case, tells me that the message is far more important than any risk of political fallout or backlash.

Let me make one thing very clear from the beginning: just like most Americans, most Missourians, and most St. Louisans, I support the 2nd Amendment. I believe responsible citizens have a right to reasonable gun ownership for hunting, sporting and legitimate self-defense. I've always believed that.

But let me tell you something else I believe: we must be very careful when it comes to defining who is responsible and what is reasonable. And over the past 10 years or so, when it comes to guns and gun violence, I'm afraid we as a nation have been drifting away from both responsibility and reason.

Let me use an analogy to explain exactly what I mean. We all believe that people should have the right to go where they please, to travel freely from place to place, right? But that doesn't mean we let just anyone operate a 2,000 pound vehicle without first proving they can do so responsibly by obtaining a driver's license, an equipment safety inspection, insurance, etc. It also doesn't mean we let people drive on city streets in 200mph race cars or armored military vehicles that bear no relationship to their legitimate travel needs.

Well, what I believe about guns is not too different from what I believe about cars: people have a right to buy them and use them, but because both cars and guns have the potential to be dangerous, both rights should be subject to some minimal conditions. We expect people to reach a certain age before they drive, we expect them to pass a test and we expect them to submit proof of identity. If they have a condition which prevents them from driving safely, we don't let them drive. And even the best drivers aren't allowed to run around in Formula 1 race cars or Abrams tanks.

All I ask with respect to guns is that we start treating them with half as much caution as we treat cars. If people want to own a gun, they should be required to submit proof of identity and pass a basic background check. If people have a condition - such as a serious mental illness or a history of violence - which prevents them from using guns safely, we should not let them buy one. And because there is no reasonable use or need for such things, people should not be allowed to own extreme, military-grade armaments.

Simply put: I want to see a decent minimum level of precaution about who gains access to guns, along with a modest limit on the intensity of the firepower available. And by the way...here too, I find myself in agreement with most Americans, most Missourians, and most St. Louisans. Poll after poll has shown that background checks are a common sense policy supported by the vast majority of American, 90% in fact, all across the political spectrum.

Consider this amazing fact: Between 1982 and 2012, there were 62 mass shootings in the United States. 49 of them involved legally acquired weapons. Now think about how many of those attacks were committed by people with a prior history of mental illness, people who recently discussed attack plans or made threats, or engaged in a variety of other "red flag" behaviors. Think about how many lives we might have saved, just by preventing those. Think about what we owe to the people we failed to protect. Think about what we must do for those in the future who expect our protection, and deserve to get it.

What we want isn't controversial. What we want is just common sense. Even if we do nothing more than improve the background check process, we can all keep our rights and increase our safety. We don't have to choose between one and the other, and we don't have to accept the status quo.

We can do better.