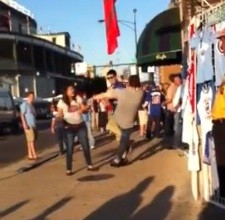 Today in drunk baseball fans doing really stupid things, we have for you some embarrassing footage of a Cardinals fan in Chicago who tried to pick a fight with a Cubs fan and totally failed.

The video apparently comes from a fan at Wrigley Field for her first Cubs game ever and "one that won't be forgotten!" she writes in the video's description.

After the Cardinals lost 7-0, "this drunk fan wasn't going down without a fight. Little did he know he'd be fighting himself, and going down pretty hard!"