In court yesterday, there was a victory for the animal rescuers who want justice for Brownie, the dog who was torched to death in north St. Louis. Adrienne Martin, the woman accused of setting her chained-up sister's dog on fire -- and bragging about it on Facebook -- will not have her $50,000 bond reduced, a judge ruled. That means she will remain behind bars as she awaits a trial in the animal abuse case.

But Randy Grim, founder of the Stray Rescue of St. Louis, which tried to save Brownie, could not celebrate for long in the courtroom. That's because family and other supporters of Martin, he says, were there to intimidate and cause a scene. And this is not the first time he has encountered them: He says they've made harassing calls, showed up in person to Stray Rescue and even caused a commotion at the vigil his group held for the slain dog.

"It can be a bit nerve-wracking," Grim tells Daily RFT. "I do hope that they stop."

Daily RFT left a message for Martin's attorney and will update if we hear back. Martin is facing charges of felony animal abuse and "knowingly burning." The full probable-cause statement is below.

Grim says that he has no grudge against Martin's family and friends, and he simply wants the court process to move forward. Next, the case will go before a grand jury.

"I'm more worried about Stray Rescue staff and volunteers and witnesses for the case than I am for myself," he says, noting that some of Martin's supporters came to the vigil last week and ripped up programs and made a scene.

Grim, after testifying yesterday about this sort of intimidation in the courtroom, even left a side entrance to avoid any confrontation, he says.

"It's intimidation and bullying," he says. "It's not helping their case at all.... I hope that her attorney tells them to simmer down."

Martin got a lot of attention last month when she allegedly torched the dog and posted incriminating Facebook updates with troubling messages like, "I'm on killa mode .....#killdogs.com.....today," and "#alldogsdontgoheaven.com."

Most recently, she was hoping to have her bond significantly reduced, but a judge denied that request -- which Grim says was the right thing to do.

"I was relieved," says Grim, noting that Martin has a past child-endangerment case on her record and should not be released at this time. "Because the family is doing this type of harassment, I told the court my fear is if she got out, it would escalate."

"Bragging about it on Facebook," he continues, "there's no remorse. If you look at all the different factors in this case, a bond reduction to me would've seen insane."

Grim says that, aside from interruptions from Martin supporters, the vigil last week was very powerful. 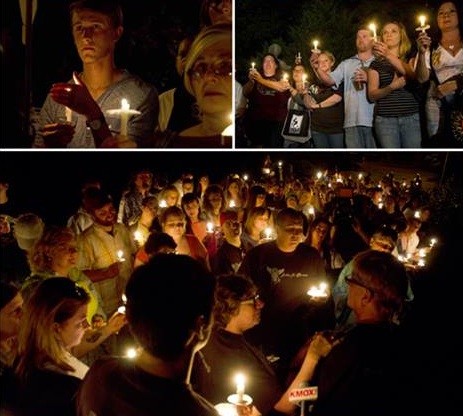 "It was actually a really cool and beautiful thing," he says. "It was just neat to see the community come together like they did."

He says that the horrific allegations resonate with people beyond typical animal supporters.

Continue for some of Martin's incriminating Facebook posts, more (warning: graphic) photos of Brownie and the full probable-cause statement.

Here are screenshots of the Facebook posts Stray Rescue references in its announcement.