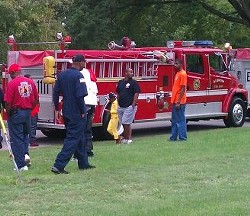 Over the weekend, police in O'Fallon, Illinois got a call that shots had been fired. When they investigated the scene, they found that no one had been hurt and that the shooter, a 42-year-old man, had apparently fired shots to scare off his daughter's boyfriend.

The incident -- which amounts to a city ordinance violation -- wouldn't be all that newsworthy if it weren't for the fact that the suspect just so happens to be the chief of the Washington Park Fire Department.

Norris was charged this week with disorderly conduct and discharging a weapon in the city, which are misdemeanor violations, Wild says.

The official police report is not yet available, but Wild says police believe Norris fired the shots in connection with his daughter's boyfriend.

"He was trying to make him leave.... trying to scare the boyfriend off," he says.

Norris, he adds, did not fire at this individual and no one was injured.

The fire chief -- recently appointed to head a department that has struggled through substantial layoffs -- was apprehended by O'Fallon police on Monday and released Tuesday after he apparently posted a $120 bond.

He will have to appear in court on September 19.

Daily RFT left a message for Norris at the Washington Park Fire Department and we'll update if we hear back.