The city of St. Louis will have a bike-sharing program.

So says the office of Mayor Francis Slay, which is now partnering with several entities to launch the first step of pursuing a bike-share program similar to the ones that have been successful in major cities across the United States.

"Promoting a cycling-friendly city has been a priority of the mayor," Patrick Brown, assistant to Slay, tells Daily RFT. "We brought our operating departments a long way in understanding the...health benefits and community-building potential that lies within giving people this additional option for transportation.... Bike-sharing is just an extension of that. It really will help to promote the commuters and the tourists within the city."

Slay tweeted this week that bike-sharing is definitively on its way to St. Louis.

There will be bike-sharing in STL. Planners, city officials, bicyclists, providers, and sponsors are on this. #fgs

Brown, who is the designated bike-pedestrian coordinator for the mayor's office, says, "When he says something is going to happen, it's going to happen. It really is a matter of when and how."

Brown says the city is partnering with Great Rivers Greenway and advocacy group Trailnet. Great Rivers Greenway, which has promoted local bike trails, is currently drafting what is called a "request for qualification," or RFQ, as a first step and then will seek a feasibility study, he explains.

"It's not just D.C., Chicago, New York," he says. "There are smaller-market cities that have done this successfully. So those models exist."

He cites Alta Bicycle Share as a potential company that could oversee the process here. Bike-sharing programs typically involve strategically placed stations throughout a city in which users -- through a range of one-time fees to long-term memberships -- can pick up and drop off bikes.

While density is a factor, Brown says, he is confident that St. Louis can build a thriving bike-sharing program. 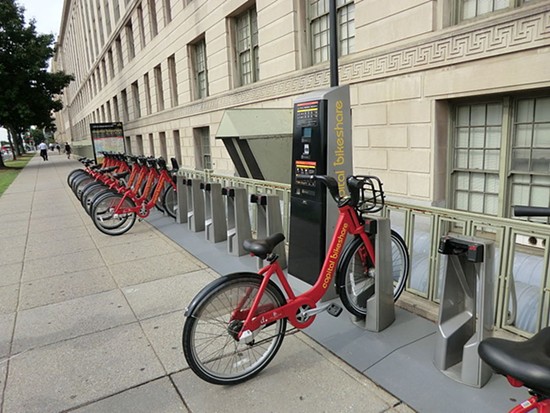 "This is...another nudge toward the alternative mode of transportation that we're trying to introduce," he says, adding, "It's a big operation...but there are very good models."

It's too early to offer a timeframe, he says, but he emphasizes that this is a priority of the mayor's office that the city wants to push forward in the near future.

A bike-sharing program, he argues, can attract more people to St. Louis and keep residents here. "If we can create density through a bike share and additionally have healthier, more explorative sort of folks that are checking out our neighborhoods, then that's great."

Bike-sharing is another step in making St. Louis less of a car-centric city, he adds.

These systems have environmental, health and economic benefits, Brown says: "We need people to get out of their cars for the health of our neighborhoods. We need them to explore and see the options available to them and spend money in these places, so we can encourage more small businesses to open and continue to stabilize our neighborhoods."

He says, "All the indicators for this are positive."