Sonic Boom in St. Louis: Inside The Nerd Convention for The World Famous Hedgehog

I didn't grow up a Sonic the Hedgehog fan. In my early video game days, Pitfall Harry represented my family's Atari allegiance, and Mario and Link later led us to Nintendo heaven. I knew about Sega only through visiting friends, with "the hedgehog game" being something we played before dinner at their houses.

So why was I keen to report on Sonic Boom this weekend, an event that celebrates the mascot for a gaming system I didn't play much?

Because I could wear a costume while reporting. Duh.

Sonic Boom is known as a mecca of sorts for Sonic fans. The event is smaller than traditional nerd-interest conventions like E3 or San Diego Comic Con, but it's packed with entertainment and giveaways solely focused on the world's most famous hedgehog. It's a big deal; there's only one annual Sonic Boom in all of North America (a larger companion event happens in Great Britain), so fans swarm the event. It's like the Gathering of the Juggalos, but for nerds.

For the past two years, Sonic Boom was held in California, but while planning the third installment, the Sega folks decided that fans in the Midwest deserved some love, too. With its nationally central location, St. Louis became the 2013 home for the Sonic lovefest of trivia rounds, Q&As with game developers, a performance by Sonic theme musicians Crush 40, bags of exclusive swag and a costume contest. 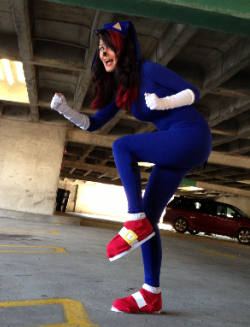 Ahhh, "costume contest." Magic words, those. I fished out my blue body suit that served as the foundation for my Sue Storm costume during Wizard World and started working on accessories that would turn me into a hedgehog.

White gloves? Check. Ill-fitting headgear of quills? Check. Red platform tennis shoes that gave me appropriately giant anime feet? Check. After three days of scorching my fingers with hot glue, writing the preview story about the event and convincing my friend Erica that she should attend this strange thing with me, I was ready for Sonic Boom.

During the ride to the Pageant (made a little bumpy by driving in my comically-giant shoes), Erica and I pondered what might be in store for us. What kind of food would be available on the buffet that was included with our Sonic Boom tickets? Would everyone be in full costume? Would we be the only adults with no kids, thus making us appear super creepy?

We were overwhelmed by the Sonic-ness from the moment we entered venue. Nearly everyone was sporting Sonic hats, Sonic toboggans, Sonic t-shirts and Sonic backpacks while carrying Sonic plushies. It was as if the Sega store had thrown up and fans were wearing the adorable vomit.

About four steps through the door, a kid of about sixteen cornered me to talk about my costume. To him, I was a mix of the Sonic and Shadow characters: Sonic was represented in my entire blue outfit, but Shadow (Sonic's dark hedgehog rival) came through in my black and red striped hair. The guy was flummoxed that I seemingly hadn't chosen to be just one or the other, ignoring my repeated responses of "This is just my hair, I swear. I'm not Shadow." Throughout this "conversation," he held his hand up expectantly, and after a few minutes, I realized that I was supposed to high-five him. I finally did so lamely and he went away. Erica shook her head, and we scurried down to the floor to people-watch while waiting for Crush 40 to perform.

In the pit, we were surrounded by even more hedgehog ears and discovered that the average Sonic Boom attendee appeared to be fourteen years old. The first Sonic title was released in 1991, and many of these kids weren't even born until just before the hedgehog's games were ported from Sega to Nintendo and other platforms in 2002. Erica and I definitely were the old people on the floor, we definitely were among the few without kids in tow, and we definitely were starting to feel like creepsters.

Fans apparently like a thirty-something, underweight Sonic/Shadow in spandex, though, so a bunch of people put me into traditional Sonic poses -- thumbs up, peace sign and "#1" finger -- and took my picture. That's when I was bum-rushed by a little girl who not only dressed as Shadow but also was acting as Shadow.

"So we meet again, Sonic," she said as she stormed over, eyes blazing. I was completely unprepared for this and stood there helplessly as she recounted "our" last meeting and how I "foiled her plot." It was kind of adorable but also slightly unsettling to hear this eleven-year-old using words like "dastardly" and "thwart." I feebly admitted that I hadn't rehearsed any lines and couldn't verbally spar with her, and as her face fell, I was thankful that the emcee came out to welcome Crush 40. Wondering if I really was jerky like Shadow for crushing a kid's imagination, I turned toward the stage. 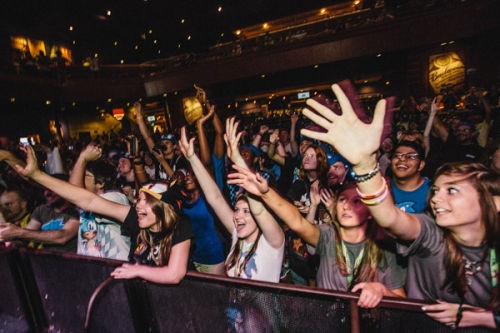 I've reviewed shows in the teen genre before, but only Taylor Swift has been close to inducing the kind of ecstasy that Crush 40 immediately spread among the fans. From the first note, singer/songwriter Johnny Gioeli and guitarist/composer Jun Senoue ignited such a rapture that I thought the kids would faint from all their ass-shaking and hand-waving. With Gioeli's racing, energetic voice and Senoue's whip-fast licks, Crush 40 showed why they were perfectly suited to creating themes for Sonic games.

As the duo performed "What I'm Made Of," "Live & Learn" and "Sonic Boom," I watched hundreds of hedgehog wannabes in the crowd singing along, reliving thousands of hours of gameplay and immersing themselves fully into a subculture. It sort of reminded me of that scene in Bye Bye Birdie when all the girls faint over Conrad Birdie, but then I realized that these kids really were experiencing their own Gathering. They were the Juggalos and Crush 40 was their ICP, but with way less swearing or Faygo. It both frightened and awed me.

Exhausted from the emotion on the floor, Erica and I hit the buffet tables. The Sega folks represented St. Louis well with toasted rav, Gus' pretzels and gooey butter cake, and kids also could get hopped up on hot dogs (Sonic's favorite is a chili dog! For real!), sliders, homemade potato chips, nachos and all the water and soda they could handle. The dessert table had plastic shot glasses of milk, which we couldn't stop admiring.

I made myself a cheese-and-onion sandwich, grabbed a few chips, loaded up on three slices of buttercake and hit the grown-up seating in the balcony to watch the Q&A with Sonic game designers Takashi Iizuka and Kazuyuki Hoshino. Honestly, I was stuffing my face too much to take many notes during this part, but I did learn that the designers believe a Sonic movie will happen, that it'd be cool to make Sonic Adventure 3 and that they'd like to make Shadow a playable character again. There also was an unfortunate deal about how Sonic's wannabe-girlfriend Amy Rose is only supposed to be "cute, not tough," which sent Erica and me into a tizzy about the portrayal of women in video games and other media.

Full of calories and feminism, we headed back downstairs when they called for costume contest entrants. THAT WAS ME! I bounded onstage with about twelve other Sonics and a few Amy Roses, Shadows and other characters. I still had my phone in my hand when we lined up, so I tried to tweet that I was on a stage pretending to be a hedgehog RIGHT AT THAT VERY SECOND, but my phone decided to be an ass. RFT photographer Theo Welling caught my attempt anyway (I'm the Sonic on the left): 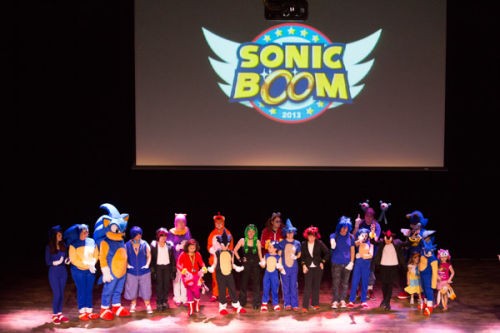 I quickly sized up my competition and determined that my main obstacles to glory were the handful of adorable youngsters or the professional costumers with spectacular getups. Before the show, I had given up on adding Sonic's beige arms and tummy to my costume (Pre-show text to costuming friends: "How do you force duct tape around your boobs to lie flat?"), so I knew I'd lose points for that. However, I had giant shoes, homemade quills and was the only one in spandex. Who doesn't love somewhat adorable ladies in spandex? Shut up, I had a shot. I DID.

The emcee brought each of us to center stage to talk about our costumes and answer a few questions. Here's how our exchange went:

Emcee: Wow, with that hair, you totally should have been Shadow tonight! Me: Sigh. You have no idea how many times I've heard that. It's just my real hair, honest. Emcee: So how long did it take you to put your costume together? Me: About three days, with lots of burns from the hot glue gun. Emcee: What made you decide to dress up? Me: Oh, honey, I have a whole closet full of bodysuits and costumes. *wink to the audience*

And that, friends, is how you inspire creepy dreams while looking like a cartoon hedgehog. 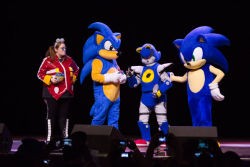 Unfortunately, it wasn't enough. A female version of Doctor Eggman took third place, a professional Sonic took second and a spectacular Metal Sonic with glowing eyes and a jet engine was crowned the winner. No spandex in sight. Womp womp.

By this point, Erica and I had been among the Nerdalos for about three hours. We were getting a little tired and grumpy, so we grabbed more gooey buttercake and plopped down to watch two teams compete in the Sonic trivia contest. Did you know that Sonic's red shoes were partly inspired by Santa Claus? Or that Sega used "Wonderman" by Right Said Fred to promote Sonic the Hedgehog 3 in Europe? Or that Big the Cat weighs 616 pounds? We didn't either, but the adorable moppets on stage did.

We became restless and decided to fetch our free goodie bags from Suite 100, which contained Sonic Boom exclusives such as a t-shirt with the event logo and the Gateway Arch, a Sonic lanyard and a Chao bobblehead. Sweet. Swag in hand, we ran inside to play the demo levels of the upcoming Sonic Lost World (Release date: October 22) and wait for this whole shebang end. We then were treated to two exclusive cut scenes from the new game (which looks pretty damn fun and adequately Sonic-y), the game designers and Crush 40 called us the greatest Sonic fans in the world and Sonic himself danced around to "Groove Is in the Heart."

Five hours after Sonic Boom began, the Sega folks finally gathered onstage to lead the audience in singing the original "Seeeee-gaaaaaaa" start-up game sound for a "Kumbaya" ending. I changed into the stupidest, most comfortable U2 shirt I own, and Erica snapped a photo of me as Zombie Human Sonic. We had survived the Gathering of the Nerdalos, and we didn't even need a drug bridge to do it.