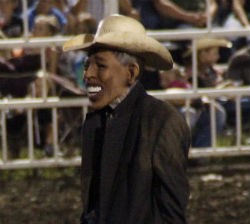 On Saturday at the Missouri State Fair, a rodeo clown put on a mask of the president's face while an announcer repeatedly made taunting remarks, asking if anyone would like to see Obama run down by a bull.

This is the story from one outraged attendee who shared his account -- and photos and video evidence -- with Daily RFT yesterday. Since the first report on the blog Show Me Progress, the stunt has received national attention and condemnations from Missouri Republican and Democratic officials alike.

Just prior to the start of the bull riding event, one of the clowns came out dressed in this. The announcer wanted to know if anyone would like to see Obama run down by a bull. The crowd went wild. He asked it again and again, louder each time, whipping the audience into a lather. One of the clowns ran up and started bobbling the lips on the mask and the people went crazy. Finally, a bull came close enough to him that he had to move, so he jumped up and ran away to the delight of the onlookers hooting and hollering from the stands. We then left quickly and quietly.

And larger versions of the rodeo clown with the Obama mask, courtesy of Beam: 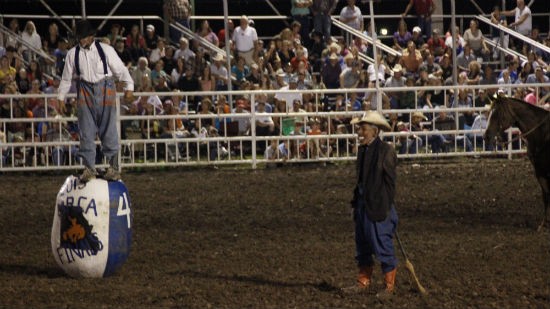 Beam, a Higginsville resident, tells Daily RFT that he went to the state fair with his wife and took a visiting student from Taiwan -- who is staying with them -- with the hopes of showing him a United States tradition.

"We wanted him to see the rodeo, because that's uniquely American. It's always a family kind of thing, a patriotic kind of thing," he says.

But toward the end of the night, he says, the Obama rodeo clown appeared.

Recalling the announcer's commentary, he says, "Then, he started saying, 'How many people want to see Obama trampled by a bull?' And the crowd is cheering on and on and so he kept it up. It just didn't stop. It went on and on and on and on."

Beam says, "I got sick to my stomach." 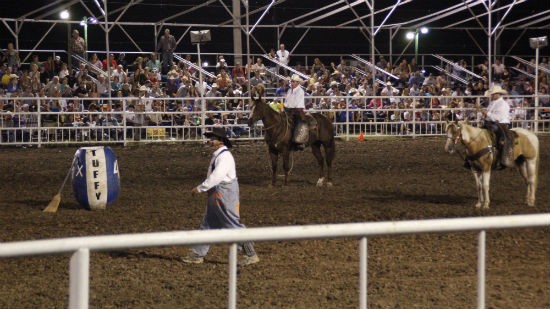 Everyone around him was enjoying it, he continues. "Nobody was uncomfortable but us that I could see.... They all wanted this to happen. It was hideous. I was sickened as a white man. Had I been a person of color, I would have been afraid."

He adds, "This is on Missouri state grounds.... They made it racial in my opinion, which made it aggressive as well as exclusionary.... It was not only the way the president was portrayed, but also the crowd's response, so enthusiastic to see any human being trampled by a bull."

Beam says he only intended to alert his Facebook friends and write a letter to the governor and state fair officials complaining, but his message has already spread virally.

The announcer is heard saying, "I'm excited! Yahoooo! We're gonna smoke Obama, man! You ready? Obama, they're coming for you this time!"

"Obama, watch out for those bulls!" he says at another point.

And on and on.

The Missouri State Fair, which is funded by taxpayers and was established through the state legislature, issued an apology late yesterday amid criticisms from prominent lawmakers in the state.

The performance by one of the rodeo clowns at Saturday's event was inappropriate and disrespectful, and does not reflect the opinions or standards of the Missouri State Fair. We strive to be a family friendly event and regret that Saturday's rodeo badly missed that mark.

She did not respond to our inquiries on who was responsible for the incident and what kind of consequences might occur.

The State Fair received more than $400,000 from taxpayers this year. Eli Yokley has identified the announcer in question as Boonville School Superintendent Mark Ficken, president of the Missouri Cowboy Rodeo Association.

Meanwhile, the stunt has faced criticisms from a range of politicians, notably Lt. Governor Pete Kinder, a Republican.

Continue for response from Missouri officials and more photos.

Some more photos from Beam: