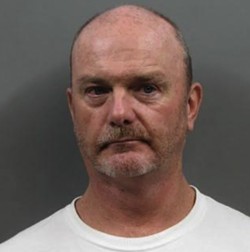 Today in incredibly bizarre St. Peters crime stories, we bring you the case of Grady Newton Niceley, a 50-year-old man who apparently likes to take off his clothes, lie on the ground and peer into apartment windows.

That's the story according to the St. Peters Police Department, which says that Niceley was caught and subsequently arrested this week after multiple witnesses saw him nude, looking into private homes. He was allegedly hiding in grass.

Melissa Doss, police spokeswoman, tells Daily RFT that a maintenance worker nearby "opened up the blinds to do some work" and noticed the nude man. "He said the suspect saw him and started to run."

Niceley is facing a charge of second-degree sexual misconduct from the St. Charles County Prosecuting Attorney's Office after the indecent-exposure incident on Tuesday morning.

Witnesses stated that they observed Niceley hiding in the grass, naked, at the Sun River Village Apartments and looking into apartment windows. When confronted Nicely ran towards his vehicle and put his clothes back on.

Then he apparently drove off.

Doss offers some additional details, telling us that the maintenance worker reportedly ran out of his building and chased after him -- in a golf cart.

Eventually, the suspect allegedly got back to his vehicle, a white station wagon, and put some shorts on and drove off -- but not before the witness caught a glimpse of his license plate.

He called it into police and "patrol officers canvassing the area saw that vehicle within five or six minutes of the incident," Doss says.

Niceley, the charges say, has a history of this kind of behavior: The prosecutors cite several prior offenses of indecent exposure.