Once again, millions of gallons of untreated wastewater have entered the Mississippi River due to a malfunction at a St. Louis treatment plant.

Yesterday afternoon, a power outage at the the Bissell Point Wastewater Treatment Plant resulted in the discharge, according to the Metropolitan St. Louis Sewer District, which says that the problem persisted from about 12:15 p.m. to 1:45 p.m. During that timeframe, approximately 3.5 million gallons of untreated wastewater entered the river from the plant, which is located at 10 East Grand Avenue, in an industrial section of north St. Louis.

The plant, the agency explains, utilizes two power feeds to operate and has a third one that acts as backup source. So when two of the feeds failed yesterday, the plant "ceased normal operations" -- and the discharge began.

About 90 minutes later when power to one of the failed feeds was restored, the plant began operating normally and the discharge stopped.

Are there any health or environmental risks associated with this? 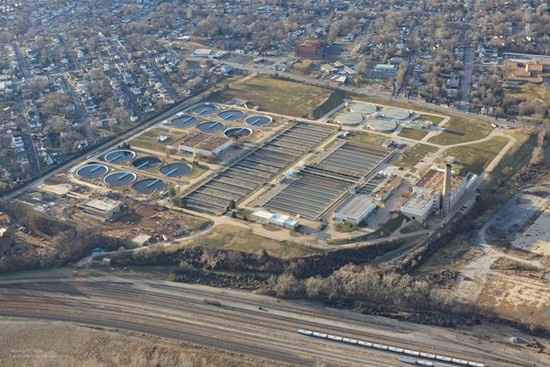 The announcement says, "MSD works diligently to protect against all discharges of untreated wastewater into area waterways. While a discharge is not acceptable by any standard, there is minimal risk to human health and safety, and to the environment..."

- This portion of the Mississippi River is not commonly used for recreation. Thus, the risk of contact with the wastewater was minimal.

- Drinking water suppliers must adhere to - at all times - strict regulations and guidelines for the treatment of drinking water. Drinking water providers commonly test and treat for the bacteria and other pollutants contained in untreated wastewater.

- The flow rate and volume of water in the Mississippi River at any given time is such that the untreated wastewater was diluted almost instantaneously.

Still, "MSD reiterates that discharges of this nature are not acceptable and the agency works diligently to protect against them," the statement says.

Officials with the agency, as required by law, have reported it to the Missouri Department of Natural Resources, which will calculate the exact discharge amount in its final report on the incident.

There have been multiple similar incidents in recent months.

In April, a failure at the same treatment plant persisted for days when the site lost its capacity to pump over a floodwall.

In June, a broken valve at a pump station caused untreated wastewater to discharge into the River des Peres less than three-quarters of a mile from the Mississippi River.

And in May, fourteen barges broke away in the Mississippi, causing a 300-gallon oil spill.