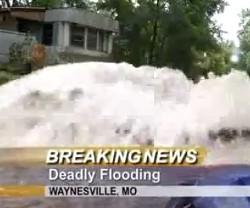 Governor Jay Nixon has declared a state of emergency in response to the heavy rain and intense flash flooding plaguing parts of southern Missouri. His announcement comes just after news broke that a four-year-old boy was swept away in the rising waters and did not survive.

The boy, who officials have not yet named, died in Waynesville this morning, says Pulaski County Sheriff Ron Long. He and his mother were reportedly inside a car that was swept away by the rising flash flood waters between a Price Cutter grocery store and Waynesville Middle School. As of 11 a.m., the woman and others in the car were still missing and a search is underway, authorities say in their latest update.

Weather patterns forecast for the state over the next several days indicate that flooding could continue to cause serious problems, the governor's office says.

"Parts of southern Missouri have been hit with heavy rain for several days, causing deadly flash-flooding, and that threat is not over," Nixon says in a statement. "We have moved resources into the region to assist local authorities, but it is extremely important for the public in affected areas to pay close attention to weather conditions, have an evacuation plan and immediately move to higher ground if needed." 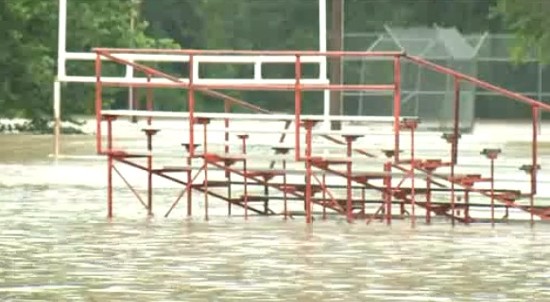 Waynesville city officials say that the old record for cresting at the Roubidoux River was eighteen-and-a-half feet and it is now at 21 feet -- and may crest higher. KY3 News has footage showing the flooding.

The Missouri Department of Transportation also has an updated list of road closures, pasted in below.

The Missouri State Highway Patrol has deployed additional marine operations troopers, a rescue helicopter and other assets to the region to assist local emergency responders, the governor says.

The governor's office passes along these safety tips:

-Do not walk through moving water. Six inches of moving water can make you fall. If you have to walk in water, walk where the water is not moving. Use a stick to check the firmness of the ground in front of you.

-Do not drive into flooded areas. If floodwaters rise around your car, abandon the car and move to higher ground if you can do so safely. You and the vehicle can be quickly swept away. Six inches of water will reach the bottom of most passenger cars, causing loss of control and possible stalling.

-A foot of water will float many vehicles. Two feet of rushing water can carry away most vehicles, including sport utility vehicles and pick-ups. Even if the water appears shallow enough to cross, don't try it. Water hides dips in the road. Worse yet, there may be no road at all under the water. Flooding can scour away the entire road surface and a significant amount of ground beneath.