Dustin Matthew Grigsby, nineteen, is a volunteer firefighter in Old Monroe in Lincoln county. He is also responsible for starting fires.

Potentially, a lot of them.

That is, at least, according to the Lincoln County Sheriff's Office, which charged Grigsby in connection with a weekend fire and is investigating whether he's the arson suspect behind more than a dozen other fires in Old Monroe.

"We pride ourselves in helping members of our community. Mr. Grigsby is accused of a crime and will be brought to justice," Old Monroe Fire Chief Chris Blevins says in a statement released by the sheriff's office. "I dismissed him from his duties effective the minute he was charged. It is now time for our community to begin healing from the damage caused by this individual."

What did Grigsby do?

On Saturday, the Old Monroe Fire Protection District responded to a detached garage structure fire along the 100 block of First Street in Old Monroe. At the time, officials didn't know what caused the fire. 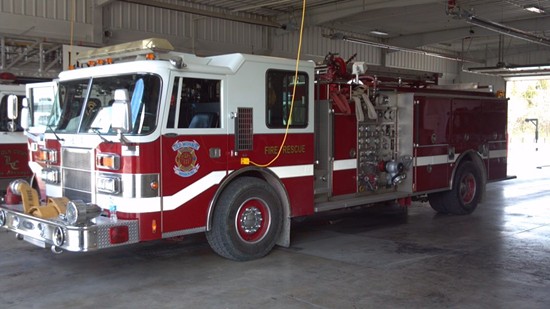 The following day, however, John Adams, owner of Adams Automotive across the street, contacted police after reviewing his security camera footage.

From the footage, investigators observed a white 1990's Chevrolet Lumina car pull next to the garage and remained there with its headlights off. A short time later, a white male later identified as 19-year old Dustin Matthew Grigsby, of Old Monroe, emerged from his parked vehicle and entered the garage. Within minutes of departing the garage, the structure was fully engulfed in flames.

Lincoln County Fire Marshal Barry Nuss told investigators that the Old Monroe area has had a "series of suspicious fires and they appear to have been done in circular pattern," police note.

The Lincoln County Arson Task Force has been investigating a string of up to fourteen suspicious structure fires near Old Monroe this year, in addition to fires in the previous years.

As the press release notes: "A highly unusual number of fires for this relatively quiet Fire District."

Grisby, however, did not admit to the other fires in the area.

"Over the past several months my office has received multiple community tips regarding criminal activity," Sheriff John Cottle says in a statement. "We appreciate the help from our citizens leading to the arrest of the suspect."

Grigsby is facing charges of second-degree arson and is currently being held at the Lincoln County Jail on a $50,000 cash-only bond.