Bob Reuter: Elevator in Fatal Accident Was Installed in 1918, Had No Operating Certificate

Bob Reuter, a 61-year-old legend of the St. Louis music scene, died over the weekend in a tragic elevator accident at a downtown loft where he was reportedly moving. Our sister blog RFT Music has collected and written tributes to Reuter in the wake of his passing.

But how did an accident like this happen? And who is responsible for keeping elevators like this one up to code?

The Missouri Department of Public Safety oversees inspections of elevators, and online records show that the one in question had no operating certificate listed. And the elevator was apparently installed in 1918.

The building where the accident happened was 1129 St. Charles Street.

Officials say that on Saturday, Reuter opened the manual door to this freight elevator and fell eighteen feet into the shaft -- a fall which he did not survive.

The incident is still under investigation, so local law enforcement don't have a whole lot of details yet to share. 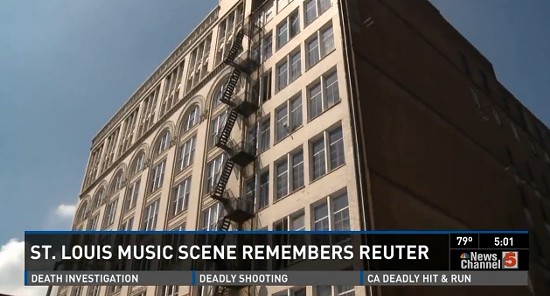 Captain Dan Sutter, a spokesman for the St. Louis Fire Department, tells Daily RFT that there is no reason to believe there was any suspicious activity and can't at this time offer any further information about how the accident happened.

Meanwhile, Maggie Crane, a spokeswoman for the city tells us -- as the Post-Dispatch first noted yesterday -- that building officials performed an inspection in May of this year and found a couple of problems with emergency-exit signage and lights. The building addressed those problems.

The elevator in question, however, was locked and out of commission, building inspectors noted.

Between then and now, the elevator, it seems, was reopened. But the state is responsible for this regulation. (Daily RFT left a message this morning for a state public-safety department spokesman and will update if we hear back.)

A state database says that the building is owned by a company called Taylor on Washington LLC. A number listed online for this entity was not working this morning.

That online listing for the elevator shows no listed operating certificate and an installation year of 1918.

The city notes that an occupancy permit had not yet been requested for the new tenant in this case. By law, building officials must have this permit before move-in, and if they obtain one late during the 30-day period after move-in, they must pay a fine. [*This sentence has been edited to clarify occupancy permit requirements].