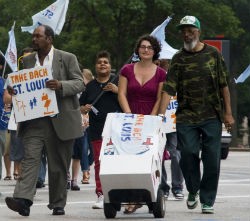 Activists behind an initiative called "Take Back St. Louis" say they are working to limit corporate influence on the city and promote sustainable development. Yesterday the coalition, spearheaded by Missourians Organizing for Reform and Empowerment (MORE), delivered more than 36,000 signatures to the city as part of a ballot-initiative petition to ban tax breaks for certain corporations.

City officials, however, say the group could devastate the economy and even hinder the delivery of the most basic public services with this effort. And they are coming down strong with their criticisms.

"This is very broad, very poorly conceived and very badly written," Maggie Crane, spokeswoman for Mayor Francis Slay, tells Daily RFT. "It could do real damage to the city's economy and it could cause a lot of chaos and uncertainty."

One thing is clear: The activists behind the measure and the city of St. Louis have drastically different interpretations of the written language of the proposal.

According to MORE and its allies, the "Take Back St. Louis" initiative -- a proposed amendment to the city charter that voters would have to directly approve on the ballot -- would block St. Louis from granting a wide range of financial incentives to corporations that are considered "unsustainable energy producers."

One of the main targets of this measure is Peabody Energy, the corporation headquartered in St. Louis which has received a variety of tax breaks from the city (and has been a central target of MORE protests for quite some time).

The activists hope that the measure will be placed on the ballot in March for voters to consider.

Meanwhile, the city is pushing back with harsh critiques, arguing that the various definitions in the initiative are so broad that they could apply to a wide range of businesses in St. Louis -- and even city departments directly.

"At minimum, it will create uncertainty and litigation," Crane says. "At worst, it will damage the city's economy, drive jobs out of the city and hurt the delivery of vital public services."

And the "unsustainable energy producers" that would be banned from those incentives are defined as any "entity or organization...that engages primarily in the mining or extraction of any of the following: fossil fuels, coal, natural gas, oil, nuclear and radioactive materials, or other energy sources that are non-renewable." Entities that do $1 million worth of business or more with these corporations would also be banned from incentives.

That means, Crane says, the city could potentially be blocked from funding its own departments as well as companies that simply spend more than $1 million a year on electric costs.

"What would stop these companies from saying, 'If you can't help us, we'll just go to the county.' That doesn't help the environment," Crane says.

The reality is, the city can only do so much, given the current constraints of alternative energy nationally and globally, she says. "No one has come up with a perfect, clean system to fuel an entire city and until we have better alternatives, this just isn't at all practical."

Continue for response from MORE and commentary from a lawyer opposing the measure.

Crane says the city is still working out its next step, but will likely have some sort of campaign to educate voters about the potential impact of the measure.

MORE says that the city's interpretation is wrong.

"We actually believe this is about job creation in the city and putting money into a new green economy," MORE organizer Arielle Klagsbrun tells Daily RFT.

Arif Haque, a private lawyer who helped draft the initiative, says in a statement that the measure would not affect basic services or a wide range of businesses in the manner the city has described:

This ballot initiative was specifically crafted in anticipation of the question of whether it would apply to businesses that buy large quantities of electricity and gasoline, but do not otherwise do business with unsustainable energy producers. The initiative would not target such businesses. This initiative is about reallocating resources to create a new, local, green economy in St. Louis--not punishing people for buying power. The definition of "Public Financial Incentives" came from research on how the City defined various incentive programs on their website and in the City Charter. The ballot initiative deals with incentives, which are perquisites not offered to all members of the public.

Meanwhile, the city is not the only opponent of the initiative.

Jane Dueker, a local attorney, has in the last few days become an unofficial spokeswoman against the ballot measure; she tells Daily RFT she represents a number of businesses and individuals that oppose the initiative (though she says she can't disclose them at this time).

She tells Daily RFT that there are all sorts of legal problems with the measure as written and even the process the group has taken -- and reiterates the argument that this would be detrimental to the city. 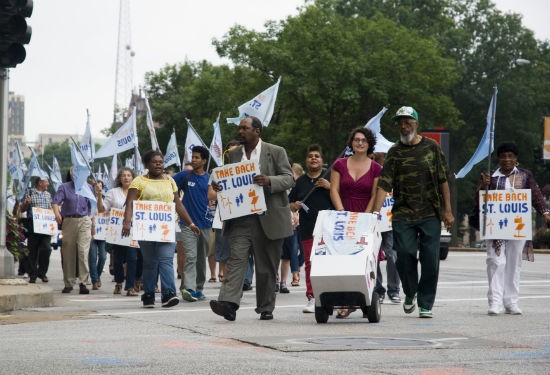 "There is no charter authority to basically shut down the appropriations and the spending power of the city of St. Louis," she says.

She argues that the measure could even impact charities and institutions like the zoo that have corporate sponsors.

Dueker adds, "If sustainability was your goal, this is just destruction."

Some of her tweets on the subject:

@aklagsbrun Do you support cutting off vital services and funding for the Zoo, United Way and Metro? That doesnt help sustainability

@ward24stl, sad truth is that @TakeBackStL will cut off all city funding and support to @STLMetro. That hurts sustainability & workers

This petition isn't about Peabody - it's about the hundreds of businesses and other organizations, large and small, that could be caught in the net of this misguided proposal if they buy electricity, oil, gasoline, natural gas or nuclear materials in any meaningful quantities. We are optimistic that, should the proposal reach voters, the citizens of St. Louis would recognize the significant damage this proposal could do to our city's reputation and its ability to attract and retain business.

And the full language of the ballot initiative:

A new Article XXVII to the Charter of the City of St. Louis

(b) Right to Establish a Sustainable Energy Policy. The residents of the City of St. Louis declare a right to establish policies to promote and support a sustainable energy future for the city. That right includes the right to make laws that: declare certain energy consumption, production and extraction activities as environmentally unsustainable; that support the ability of residents to enjoy a healthy and pleasant quality of life indefinitely; and that do not violate the rights as secured by this Charter.

(a) The City shall not grant any Public Financial Incentive to any Unsustainable Energy Producer.

(ii) the availability of City of St. Louis property - particularly land held by the Land Reutilization Authority and the Land Clearance for Redevelopment Authority - to as wide an array of individuals and groups as possible for Sustainable Energy Initiatives;

(iii) the use of locally generated energy wherever possible to achieve reductions in unsustainable energy use and waste due to inefficient transmission of electricity, with no purchasing of renewable energy credits for systems that will not provide the City with any power.

(a) "City" means the City of St. Louis, including without limitation the City's offices, boards, departments, agencies, economic development authorities, the Board of Alderman, the Board of Estimate and Apportionment, the Mayor and all entities reporting to any of them, and all other subdivisions thereof.

(b) "Public Financial Incentive" means any economic or financial incentive offered or provided by the City, in whole or in part, and includes without limitation:

(i) any tax reduction, credit, forgiveness, abatement, subsidy, or any other tax-relieving measure;

(iii) any monetary or non-monetary benefit related to any public fund or program;

(iv) any monetary or non-monetary benefit related to any bond, loan, or similar financial arrangement;

(v) any reduction, credit, forgiveness, abatement, subsidy, or any other relief related to any bond, loan, or similar financial arrangement; and/or

(vi) the ability to form, own, direct, and/or receive any economic or financial benefit from any special taxation district.

(d) "Renewable Energy Producer" means any entity or organization, no matter how organized under state, federal, or local law, or not formally organized, that engages primarily in the production of renewable energy. An energy source is renewable if it is derived from existing flows of energy generated by on-going natural processes, including, but not limited to, energy generated from the sun, flowing water, wind flows, and geothermal heat flows.

(e) "Sustainable Energy Initiatives" include but are not limited to: solar power systems, wind turbines, urban gardens and farms, large scale commercial and residential weatherization, recycling centers, sustainable building deconstruction projects that include material reclamation, electric vehicle plug-in stations, local food coops, and other initiatives that either decrease the consumption of energy in the City of St. Louis and/or increase the amount of renewable energy produced in the City of St. Louis.

Any citizen of the City of St. Louis may enforce this Article through an action in equity in any court of competent jurisdiction. In any such action, the citizen shall be entitled to recover the costs of litigation, including, without limitation, expert and attorney's fees.