On Monday, we reported that the Missouri legislature may very well sign into law a controversial pro-gun bill with the help of a few key Democrats. Governor Jay Nixon, a Democrat, vetoed the "Second Amendment Preservation Act," but Republican backers of the legislation are working to override his veto and implement the new law, which would, among many provisions, criminalize the enforcement of certain federal firearm laws in the state of Missouri.

Daily RFT since got a chance to speak with one of the Democrats who could make this override a reality. State Rep. Keith English, who represents parts of St. Louis county, tells us that it's important to him that Missouri stand up to the federal government on the issue of gun control.

"I represent Democrats, of course, but I'm also a gun supporter," English says. "This is a huge Second Amendment supporting state. I'm here to speak for those people."

English voted in favor of the proposal, House Bill 436, and says he plans on voting to override the governor's veto as well in September. As we noted on Monday, English is one of at least three Democrats who intend to support the legislation, which, as the Associated Press calculated, means a successful override is likely. (At least one of the Dems who voted in favor of the measure is, however, expected to vote no on the override).

"As it stands right now, I'm not looking to change my vote," English says.

The bill rejects all federal acts that infringe upon Missouri's Second Amendment rights, an effort inspired by the Obama administration's gun control initiatives launched in the wake of the tragic Sandy Hook Elementary School shooting last winter. It would make it a criminal act for state or federal officers to enforce such laws in Missouri and critics say the bill is clearly unconstitutional because states cannot pass laws contradicting federal ones.

The bill also has controversial provisions regarding armed employees in schools and restrictions on the publishing of gun owners' names.

Supporters and opponents agree that the law would likely end up in court; backers of the bill argue that it's a fight worth having and that states should take on the feds as a method of protesting infringements on constitutional rights.

"People on both sides of the issue are saying that it's unconstitutional," English says, later adding, "I'm willing to allow the Supreme Court to decide whether it's constitutional or not."

"I believe it's our Second Amendment right to bear arms. If we decide to cow down and not overturn the veto, what is the federal government going to do next?" English continues, noting that he's a gun owner and hunter.

"We don't want to back down," he says, arguing that Missouri has strong gun laws on the books already and doesn't need further restrictions.

This is not the only issue in which English has deviated from his party. In February, we reported on an anti-abortion bill that he sponsored that would have required women to hear the heartbeat and view an ultrasound before going forward with the procedure. It did not pass.

"I represent my people to the best of my ability," he says.

English notes that there are a handful of Democrats in the legislature who are "totally anti-gun," citing one assault rifle ban proposal that he thought was particularly extreme. "You have got to be kidding me!" 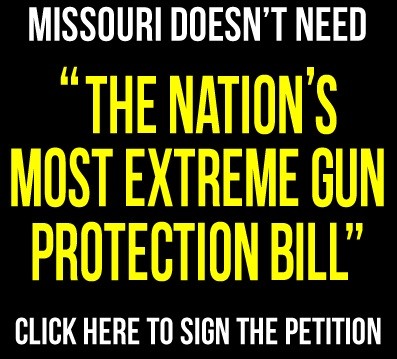 Regarding last year's elementary school massacre, he says, "I pray and feel sorry for those families."