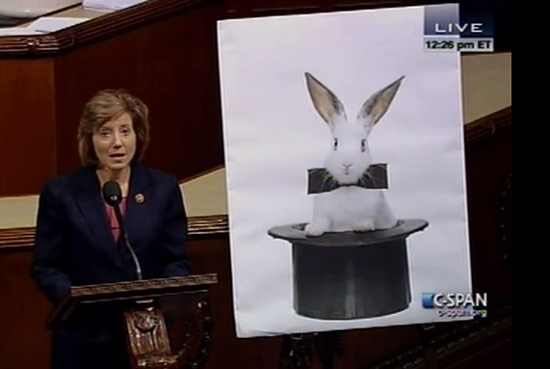 Congresswoman Vicky Hartzler, a Republican who represents Missouri's 4th Congressional District in D.C., testified yesterday on the House floor and brought with her a giant photo of a bunny in a magician's hat. Why?

Well not directly, but, you know, basically!

Hartzler was speaking about the problem of government overregulation, which, believe it or not, actually relates to a little bunny rabbit in Missouri.

"The purpose of doing something like this is it raises awareness of government red tape," Steve Walsh, spokesman for Hartzler, tells Daily RFT. "This is something she has been talking about for some time. Sometimes a visual is so important in trying to raise awareness."

This brings us to Ozark magician Marty Hahne and his rabbit, Casey. Hahne -- according to a Springfield News-Leader article Walsh sent us (with the subject line "Hop to it!") -- has some gripes with the U.S. Department of Agriculture.

Apparently under a new USDA rule rolling out this summer, he must put in place a detailed disaster plan of "who will do what with the animal if a tornado, power outage or other emergency hits," the paper reports.

"A lot of hoops to jump through to just have one rabbit," Hahne tells the News-Leader. "I don't need the government to waste my time."

Here's Hartzler testifying about this story:

"We had heard about this magician who was having a hard time dealing with regulations," Walsh tells Daily RFT. "This is an example that highlights what Congresswoman Hartzler has been saying for some time about government overregulation getting in the way of everyday people as they try to perform their everyday jobs throughout their everyday lives."

And she is hoppin' mad!!

The story of the rabbit has received a fair amount of attention from conservative news outlets not pleased with the Obama administration. (You can read about the Department of Agriculture's response to this situation over at the Washington Post. Daily RFT also left a message with Hahne, and we'll update if we get a chance to speak with him.)

In the meantime, here are some more images of the congresswoman with that bunny.

And a close-up of the bunny: