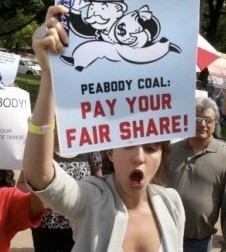 Update below: Today, St. Louis activists who have regularly protested Peabody Energy with high-profile rallies are pushing forward with a new kind of action against the corporation -- one that they say has not been tried before in the city.

The coalition of groups, spearheaded by Missourians Organizing for Reform and Empowerment (MORE), plans to deliver more than 36,000 signatures to the city's election board this morning, marking the first step in the initiative petition process. If all goes according to the group's plan, voters will have the opportunity on an upcoming ballot to amend the city charter with a measure that would prohibit the city of St. Louis from granting tax incentives to companies like Peabody.

"A big part of this ballot initiative is trying to realign how the city thinks about development," MORE organizer Arielle Klagsbrun tells Daily RFT.

Organizers are meeting at Poelker Park across from city hall today at 10 a.m. for a rally and subsequent march to hand over the petitions.

The initiative, which the backers have labeled "Take Back St. Louis," says the city "shall not grant any Public Financial Incentive to any Unsustainable Energy Producer."

The proposed "Sustainable Energy Policy" city charter amendment -- full language below -- defines "public financial incentive" as "any economic or financial incentive offered or provided by the City," including tax reductions, credits, tax increment financing and more. And "unsustainable energy producer" is defined as an entity or organization that engages primarily in mining or extraction of fossil fuels, coal, natural gas, oil, nuclear and radioactive materials, or "other energy sources that are non-renewable."

Simply put, if this proposal successfully makes it to the ballot and voters approve it, Peabody, which is headquartered in St. Louis, would be blocked from accessing tax breaks (as would other entities that do a million dollars or more of business with Peabody).

MORE says that the city of St. Louis gave Peabody $61 million in tax breaks in 2010 (though the company has disputed that number).

To get on the ballot, only 22,000 signatures are required.

If the election board certifies the signatures, then the proposal will go to the city board of aldermen, which would essentially have a symbolic vote on the matter. Because the initiative is a change to city charter, it has to go directly to voters; it would presumably be on the citywide ballot in March of next year.

"This kind of an approach...hasn't been used in St. Louis, and nothing like this has been put forward nationally either," Klagsbrun says.

A spokeswoman for the mayor's office tells Daily RFT that the city does not yet have a comment until it reviews the final language of the submitted proposal.

Attorneys already organizing against the measure, however, have told the Beacon and the Post-Dispatch that the initiative will likely face legal challenges and argue that the amendment is so broad it "would shut down city government" and "devastate the city..."

Critics say the language could be interpreted to even "block basic city services."

"We've had lawyers look over the petitions," Cheyenne Thomas, another organizer with the Take Back St. Louis campaign, tells Daily RFT. "We're not worried."

"The Take Back St. Louis initiative brings in the resources that we need and also allows us to use tax dollars to help sustain our land and our economy," Thomas says.

Continue for the full language of the proposed amendment and a response from Peabody.

In addition to blocking tax incentives, the amendment also calls on the mayor to "create and publish an annual and a 5-year Sustainable Energy Plan that identifies specific measures for reduction in the use of power from unsustainable energy systems in the City of St. Louis."

Klagsbrun says it's not clear yet what the opposition will look like, but she adds, "It's not surprising to anybody that corporations like Peabody...would try to cling on to any money that they could."

Daily RFT left messages yesterday with a Peabody spokeswoman and will update if we hear back.

This petition isn't about Peabody - it's about the hundreds of businesses and other organizations, large and small, that could be caught in the net of this misguided proposal if they buy electricity, oil, gasoline, natural gas or nuclear materials in any meaningful quantities. We are optimistic that, should the proposal reach voters, the citizens of St. Louis would recognize the significant damage this proposal could do to our city's reputation and its ability to attract and retain business.

She adds, "The city could clear up any back and forth about the value of the tax incentive offered to Peabody. As many have reported, it is around $4 million."

Here's the full text of the proposed charter amendment:

A new Article XXVII to the Charter of the City of St. Louis

(b) Right to Establish a Sustainable Energy Policy. The residents of the City of St. Louis declare a right to establish policies to promote and support a sustainable energy future for the city. That right includes the right to make laws that: declare certain energy consumption, production and extraction activities as environmentally unsustainable; that support the ability of residents to enjoy a healthy and pleasant quality of life indefinitely; and that do not violate the rights as secured by this Charter.

(a) The City shall not grant any Public Financial Incentive to any Unsustainable Energy Producer.

(ii) the availability of City of St. Louis property - particularly land held by the Land Reutilization Authority and the Land Clearance for Redevelopment Authority - to as wide an array of individuals and groups as possible for Sustainable Energy Initiatives;

(iii) the use of locally generated energy wherever possible to achieve reductions in unsustainable energy use and waste due to inefficient transmission of electricity, with no purchasing of renewable energy credits for systems that will not provide the City with any power.

(a) "City" means the City of St. Louis, including without limitation the City's offices, boards, departments, agencies, economic development authorities, the Board of Alderman, the Board of Estimate and Apportionment, the Mayor and all entities reporting to any of them, and all other subdivisions thereof.

(b) "Public Financial Incentive" means any economic or financial incentive offered or provided by the City, in whole or in part, and includes without limitation:

(i) any tax reduction, credit, forgiveness, abatement, subsidy, or any other tax-relieving measure;

(iii) any monetary or non-monetary benefit related to any public fund or program;

(iv) any monetary or non-monetary benefit related to any bond, loan, or similar financial arrangement;

(v) any reduction, credit, forgiveness, abatement, subsidy, or any other relief related to any bond, loan, or similar financial arrangement; and/or

(vi) the ability to form, own, direct, and/or receive any economic or financial benefit from any special taxation district.

(d) "Renewable Energy Producer" means any entity or organization, no matter how organized under state, federal, or local law, or not formally organized, that engages primarily in the production of renewable energy. An energy source is renewable if it is derived from existing flows of energy generated by on-going natural processes, including, but not limited to, energy generated from the sun, flowing water, wind flows, and geothermal heat flows.

(e) "Sustainable Energy Initiatives" include but are not limited to: solar power systems, wind turbines, urban gardens and farms, large scale commercial and residential weatherization, recycling centers, sustainable building deconstruction projects that include material reclamation, electric vehicle plug-in stations, local food coops, and other initiatives that either decrease the consumption of energy in the City of St. Louis and/or increase the amount of renewable energy produced in the City of St. Louis.

Any citizen of the City of St. Louis may enforce this Article through an action in equity in any court of competent jurisdiction. In any such action, the citizen shall be entitled to recover the costs of litigation, including, without limitation, expert and attorney's fees.