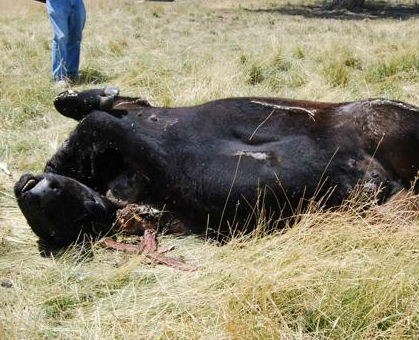 Lyn Mitchell, a Missouri rancher living about 80 miles from Kansas City, has reported three cow deaths on her property. That wouldn't be unusual were it not for the state the carcasses were found in.

The most recent cow was discovered in the field, her tongue removed, her teats cut off, her heart removed and dangling outside of her body. When the rancher moved her, there was a strange, char-like pattern in the dead grass.

What does all this mean? One theory: alien experimentation.

Here is Mitchell being interviewed by reporter/investigator Margie Kay for the Mutual UFO Network. This is case number 49159, "possible UFO landing site":

The vet said that there was no blood on the ground, the cuts were precise, and that the heart and chest cavity had little blood in them, which was very unusual and unexplainable. He vet also said that he knew animals did not cause the wounds. He looked for bullet holes or other injuries to the cow but could find none, and he does not know the cause of death.

Mitchell says she's found two of her other bovines in similar states. One had her entire udder, anus and tongue removed. In 2011, she says, she found a heifer calf with her tongue, genitalia and jaw muscle removed.

Mitchell told news station KSHB that she's open to the possibility that these bizarre surgeries were performed by aliens who touched down on her property. Daily RFT would like to posit a slightly more plausible but equally worrisome solution: A total freaking psycho is loose in Henry County and he/she is now the proud owner of cow cadaver anus, udder, tongue and teats and doing who knows what with them.

To that end, we put in a call to the Henry County sheriff's department to find out what they have in terms of human leads -- we'll update if we hear back.