Did Ellisville Councilman Matt Pirrello Give Middle Finger to Residents with "Resign" Signs?

Update below: Is Ellisville city councilman Matt Pirrello driving around town giving the middle finger to constituents who want him to resign?

Two residents, who are senior citizens and vocal critics of Pirrello -- and supporters of Mayor Adam Paul -- tell Daily RFT that Pirrello recently drove by their homes and flipped them off because they have "resign" signs on their lawns.

"Matt Pirrello was driving by, and he gave me the finger," Ellisville resident Patti Murphy tells Daily RFT. "It was very clear."

"I was really surprised. I was taken aback," she continues. "It was very disrespectful, very despicable."

These accusations against Pirrello come one month after Mayor Adam Paul was reinstated, following an intense and bizarre impeachment process that got national attention.

Pirrello, who previously served as mayor, was a leader in the effort to oust Paul, who ran on a platform against a Walmart development that some of his colleagues in the council supported. 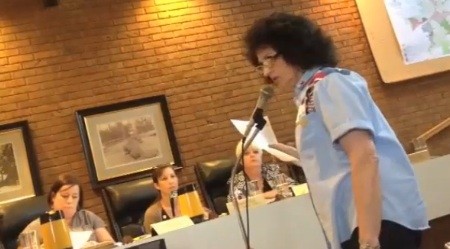 At one point in this saga, Paul's critics accused him of drinking vodka on the job, mismanaging public meetings, inappropriately cursing and a whole lot more. Paul and his attorneys have denied these claims, and last month a judge ordered that he be allowed to return to the position.

Pirrello, who took over as pro tem mayor when Paul was ousted, had publicly stated that he would resign if Paul was reinstated.

"If you give your word, stick by your word," says Murphy, a senior citizen who has lived most of her life in Ellisville. "Let Ellisville heal and resign, Matt Pirrello."

She has two signs on her lawn that just have the single word "resign" written on them. She alleges that Pirrello drove by on July 15 at around noon.

She publicly complained about this action at the city council meeting two days later. Pirrello was not in attendance.

The councilman did not respond to multiple requests for comment from Daily RFT.

Meanwhile, another 81-year-old resident and critic of Pirrello -- who wished to remain anonymous -- says that a few days prior to Murphy's incident, the councilman did the exact same thing to him.

While passing by his home, the councilman flipped the bird, the man alleges.

"He did it, absolutely," the man tells Daily RFT. "It was obvious to me."

The resident says he has lived in Ellisville for more than 50 years and once served as an alderman.

"He had made the statement that if Adam Paul got back in as mayor, he would resign," the resident says. "I really hope he does."

The Ballwin-Ellisville Patch local news site has footage of Murphy at the council meeting making her allegations.

Pirrello told a reporter for the website in a text massage that he would "never" resign and added, "I do not flip off anyone, ever, and I certainly would not be crass to a lady. It is a bold-faced lie."

Update, 10:40 a.m.: Daily RFT just heard back from Pirrello, who denies giving the middle finger to anyone.

"I don't know what Patti Murphy saw, but whatever she saw certainly wasn't intended for her," he says.

When he sees her around in the neighborhood, he says, "I, at minimum, smile, occasionally say hello. I always try to be polite."

He says of the accusations that he is flipping people off, "That's not something I do."

He adds, "I have a tendency to get animated with my hands. I am Italian."

When we ask him about the second constituent's accusations, he says, "This is just getting absurd. They're just being bullies."

He also says that one of his critics recently flipped him off.

As for the calls for him to resign, he says he will not be stepping down. He explains that he would only step down if Mayor Paul had been found innocent, arguing that he was reinstated by the judge "on a technicality."

"They never judged the merits of what we did," he says.