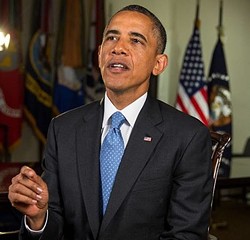 Referencing "jobs rebuilding our infrastructure," Obama discussed "projects vital to our national pride, like the one we're breaking ground on this week at the St. Louis Arch," according to text of the prepared remarks from the White House.

As we reported earlier this month, the so-called CityArchRiver 2015 project is moving forward, launching a massive redevelopment of the area around the nation's tallest monument.

Through a public-private partnership -- that includes multiple local government agencies, the National Park Service and funding from other private sources -- the project will involve a major transformation on the site, notably with a continuous "greenway" path connecting the Old Courthouse to the Arch grounds to the riverfront.

The plan also includes significant traffic changes, new bike and pedestrian trails, riverfront improvements, a redesigned Museum of Westward Expansion and more. The foundation recently released a fly-through video that offers a glimpse into the site's redesign, slated for completion by October 28, 2015, which is the 50th anniversary of the Arch's completion.

CityArchRiver 2015 is marking the beginning of the construction this Friday, with a press event featuring project partners, elected officials and federal representatives. The Missouri Department of Transportation will break ground on the initial transportation improvements that will pave the way for the so-called "Park Over the Highway, which will physically connect the Arch to the St. Louis region for the first time in history."

Obama was speaking at a shipping facility in Tennessee to deliver a jobs speech on his "grand bargain" proposal to the GOP prior to budget fights, unveiling a corporate tax reform plan.

President Obama: "I've come here today to talk about...what we need to do as a country to secure #ABetterBargain for the middle class."

Obama on simplifying our tax code: "Let's offer new tax incentives for manufacturers that bring jobs back to America." #ABetterBargain

According to the remarks -- and some live tweets from the speech this afternoon -- Obama said:

Number two: jobs rebuilding our infrastructure. Let's put more construction workers back on the job doing the work America needs done - vital projects our businesses need, like widening Route 27 here in Chattanooga, or the Jacksonville Port I visited last week; and projects vital to our national pride, like the one we're breaking ground on this week at the St. Louis Arch.

From our previous coverage, here are video and photos of the planned redesign (courtesy of CityArchRiver 2015).