Trooper The Dog, Dragged on Highway, in Recovery After Seventh Surgery (PHOTOS)

Last week, we shared with you the unbelievably horrific allegations against Adrienne Martin, a St. Louis woman who is accused of torching her sister's dog and bragging about it on Facebook. That dog, whom rescuers named Brownie after saving him from his chained-up north St. Louis home, died from his injuries.

Today, we bring you a story with a happier ending with our latest update on Trooper, a local dog who was also the victim of terrible abuse but who managed to survive. Last year, the puppy was dragged for more than a mile on the highway after a woman tied the animal to her ex-husband's truck without his knowledge. The Humane Society of Missouri announced on Friday that the dog is recovering from his seventh surgery just eight months after the abuse.

This latest surgery on Trooper -- who has become a bit of an international celebrity pup -- was on his knees.

The Humane Society says that veterinarians have diagnosed Trooper with both luxating patella, a painful condition common among dogs where the kneecap moves out of its normal location as well as a cranial cruciate ligament, or CCL, tear.

"The surgery was successful, but Trooper will be in recovery for a few weeks," Travis Arndt, interim director of veterinary services and Trooper's surgeon, says in a statement. "His accident definitely contributed to the problem, but it is not uncommon for dogs to exhibit similar knee and ligament problems, often together. Trooper is young for this to have developed, but given his traumatic history and the fact that he is a very active dog, I'm not surprised we've had to help him with this now."

Here's the photo the group posted on Friday along with an update on his recovery:

Trooper is recovering well from his most recent surgery to repair a luxating patella (his kneecap pops out of place) and a tear to his CCL (cranial cruciate ligament). He will be in recovery for a few weeks, and he's still enjoying time in his foster home and coming to "work" at the Humane Society. Since he will be in recovery for several more weeks, we're continuing to work on a wonderful placement for this dog who is so smart, has so much energy and so much love to give. We're very grateful to everyone who has donated to his care and to help take care of more animals like Trooper. You're the best!

UPDATE: Trooper had yet another surgery today, this time on one of his knees. The surgeon has told us that everything went well, but he is going to have a few more weeks of recovery. We're so lucky we have such a great team caring for our special guy! Keep him in your thoughts and send lots of good vibes so he makes a speedy recovery! Thanks Team Trooper!

The Humane Society notes that "Trooper's story has resonated worldwide with major media coverage from all corners of the globe, more than 16,500 Team Trooper Facebook fans and hundreds of thousands of YouTube views. He receives love, support and care packages from soldiers, schoolchildren and animal lovers everywhere."

You can see some of that lovin' on the organization's Team Trooper Facebook page:

And just for fun, from our previous coverage, our favorite Trooper modeling pics:

18. Trooper Modeling on a Chair

14. Trooper Being a Trouper

12. Trooper With a Puzzle Toy

9. Trooper in a Onesie

7. Trooper in the Snow

6. Trooper and His Pals 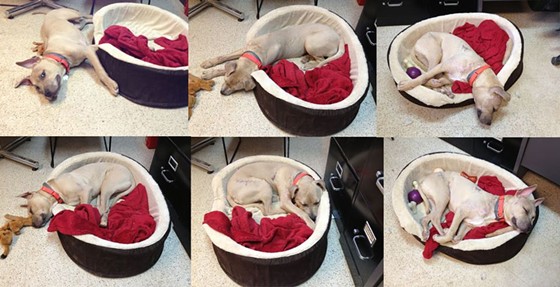 2. Trooper With a Green Bow-Tie