Believe it or not, there's been another damaging smash-and-grab burglary in St. Louis -- during a night that also apparently involved reports of more than a dozen car break-ins throughout the city.

The latest smash-and-grab victim is a pawn shop called Sam Light Loans on Olive Street in midtown -- where cops responded just after 4:30 a.m. this morning. Officers reportedly found a stolen Dodge Dakota pickup truck backed through the front doors of the business. The suspects were gone.

The tires of the vehicle, however, were apparently still spinning when cops arrived.

Here's KSDK (Channel 5)'s early footage from the scene of the burglary.

The owner of the pawn shop at 2601 Olive Street had reportedly put up gates there to block this burglary method, KMOX reports. The suspects clearly left behind quite a mess, though it's unclear if they got away with much.

Meanwhile, KSDK reports that there were also more than a dozen car break-ins last night, between about 12:30 and 3 a.m. 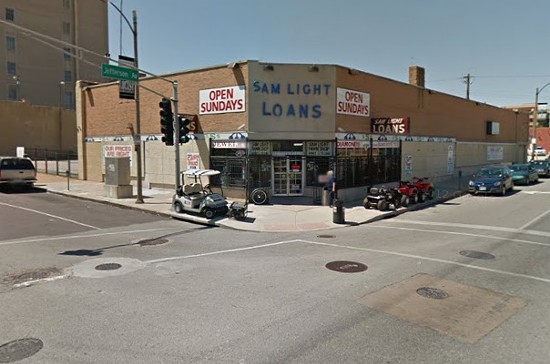 The station reports that the crime spree began Monday at a downtown Holiday Inn Express where seven vehicles were vandalized. Soon after, a group of cars were allegedly damaged in a parking area near Lumiere Place Casino at Laclede's Landing.

Then just before 2 a.m., the report says, suspects hit the area around Market and Vandeventer, forcing police to investigate four more break-ins.

One hour later, officers were reportedly called to investigate about six more similar cases in the area of Olive and North Garrison, just east of the Saint Louis University campus, the station reports.