Missouri is one step closer to legalizing marijuana.

State Rep. Rory Ellinger, a Democrat from University City, plans to introduce legislation next session to legalize pot in the state, modeled after the successful reform effort in Colorado. It will definitely be a long shot here, but this will be the first time a lawmaker in Missouri has introduced a proposal of this nature.

"I expect there will be a lot of good people that feel marijuana is wrong, that it leads down a path of worse drugs and trouble and so on," he tells Daily RFT. "I respect their opinion, but I think that it can all be disputed."

He continues, "I don't know anyone who has ever died of a marijuana overdose."

Ellinger was behind the proposal this past legislative session to decriminalize marijuana, which simply meant reducing the punishments for low-level pot possession charges. Pot, under that initiative, would still be illegal. That bill advanced further than it ever has in the past with a formal hearing in the House of Representatives on the very last day of the session in May.

Ellinger says he plans to reintroduce this decriminalization proposal again and also a separate bill to legalize pot altogether.

"The second bill will be more dramatic," he says. "It will have much less chance of passing."

Next session will not officially start until January 2014, and Ellinger says he is in the very early stages of planning the bill. The so-called Downsizing State Government Committee of the House of Representatives held a listening tour across the state earlier this month, and marijuana reform advocacy group Show-Me Cannabis testified in favor of legalization.

The group has been pushing the decriminalization proposals at local municipalities, but it does hope to eventually back a full-on legalization initiative.

In Colorado, voters passed the so-called Regulate Marijuana Like Alcohol act on the November 2012 ballot, effectively legalizing small amounts of recreational pot (in a state that already had medical marijuana on the books). Colorado, like the state of Washington, is in the process of setting up the regulatory framework for the commercial sale of marijuana for non-medical purposes.

Ellinger says he plans to look toward Colorado as a model for his bill, though he says he hasn't had a chance yet to review it closely.

"It would make it so that marijuana in small amounts -- not large amounts -- is not against the law to have," he says.

At the very least, this would get the conversation started, he says. "All of this takes time."

The thinking behind legalizing marijuana is that it's not a dangerous drug -- and is arguably safer than alcohol in many ways -- and that the prosecution of pot offenses is a continued drain on law enforcement and court resources.

"There are thousands upon thousands of young people -- it's their introduction to the criminal justice system," Ellinger says. "Their lives are thoroughly messed up at a very early age."

He adds, "The consequences of smoking one marijuana cigarette are far greater legally than they are medically." 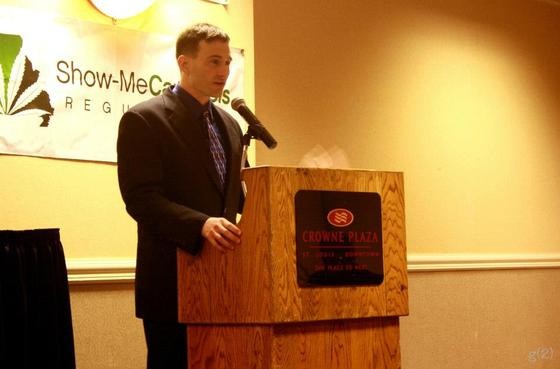 He says of some of his colleagues, "I have a number of people that come up to me privately and say, 'I'm really in favor of this.'"

Assuming the legislation does not pass, advocates say they are interested in a voter-backed initiative to amend the state constitution, similar to Colorado's process. That would likely happen in the 2016 election cycle.

Either way, introduced legislation can only help move the state in the right direction, marijuana advocates say.

"A lot of what people see as politically possible is dictated by the things the legislature does," John Payne, Show-Me Cannabis executive director, tells Daily RFT. "People start to think this is something that can happen that's realistic now.... I think there's a real momentum to it."