Update below with charges: The St. Louis woman who animal rescuers and police believe torched Brownie the dog to death has been arrested and is expected to face felony charges. And public comments discussing the violent act on her Facebook page will likely help bolster the prosecution's case.

A day before the dog was rescued, barely clinging to life, the woman, Adrienne Martin, wrote on Facebook, "I'm on killa mode .....#killdogs.com.....today." The following day, she wrote, "#alldogsdontgoheaven.com," and a few days later, apparently referencing news reports on the dog's death, wrote, "#‎laughingeveryday‬."

"That combination of arrogance and evilness is a volatile combination," Randy Grim, founder of the Stray Rescue of St. Louis, tells Daily RFT. "We're all safer with her behind bars."

As we reported earlier this month, the dog, whom rescuers named Brownie before he died, was found torched all over his body. Stray Rescue, which tried to save the very badly injured animal, said the dog had been tied up outside and that a suspect had poured accelerant on him before setting him on fire.

The short police report at the time said that the owner had discovered her abused dog and called police.

Now officials have arrested Adrienne Martin, according to Stray Rescue. As of this writing, she has not yet been formally charged, a St. Louis metro police spokeswoman tells Daily RFT. She confirms that an arrest was made.

Grim tells us that he believes the dog's owner was Martin's sister-in-law. (*See update below).

Here are screenshots of the Facebook posts Stray Rescue references in its announcement.

"Going into this, I knew this was a felony case," says Grim, who works with the St. Louis' Mayor Slay Animal Cruelty Task Force and has pushed for stricter animal-abuse laws. "There was no way around that."

Grim deals regularly with horrible abuse cases, but says, "I think it's one of the most inhumane, cruel acts I've ever heard of." 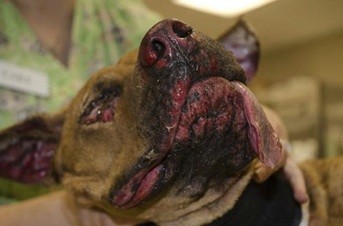 He says he is glad that law enforcement was able to make a swift arrest. "I'm really impressed with our task force, I really am."

Grim notes that readers can donate to the group's Stracks Fund, which is used as an emergency medical fund for these kinds of cases.

Martin, according to the probable cause statement, on view below, told police that her sister owned the dog. She told cops that the day before the incident, the dog bit her son, forcing him to go to the hospital.

The charges say that Martin initially denied responsibility, but eventually admitted that she was responsible for the fire.

The statement also says that a witness observed the act and saw her with another man, who was holding the gas can.

Martin has a criminal history that includes a previous charge of endangering the welfare of a child, in which she was sentenced to a year of probation. Here's the full statement.

Continue for the full announcement from Stray Rescue and more photos of Brownie, which WARNING are graphic and may be upsetting. 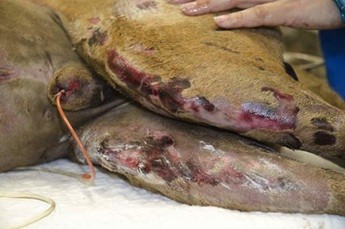 And the original police incident report:

Incident: Animal Abuse Location: 4300 block of Cote Brilliante Date/Time: 7/10/13 @ 17:00 Suspect(s): Unknown Officers responded to the above residence after a woman reported her dog was a victim of animal abuse. The owner stated that the dog was tied to the rear gate of her property and when she went to check on him, she observed severe injuries covering the dog's body and contacted officers. The owner also reported hearing the dog crying the night before the incident. Officers attempted to locate a witness to no avail. The investigation is ongoing.

St. Louis, Missouri (July 25, 2013) - St. Louis' Mayor Slay Animal Cruelty Task Force has made a felony arrest in one of the most notorious animal cruelty cases in history. Task Force members were shocked to find the suspected abuser, Adrienne Martin, set fire to a defenseless dog of the 4300 block of Cote Brilliante Avenue and later posted on Facebook, bragging about her horrific crime. The dog, Brownie, was rescued on July 10, 2013 from a short, extremely heavy chain and rushed to Stray Rescue of St. Louis for emergency medical treatment for severe burns after being lit on fire all over his face and body. Brownie was helpless in escaping his abuser because he was anchored by a chain. He later died.

Martin has been charged with felony animal abuse and knowingly burning. "I'm on killa mode... kill dogs... today," Martin posted on her Facebook page. "I mean what I say and I say what I mean... all dogs don't go to heaven."

"This is one of the most disturbing abuse cases I have ever dealt with," said Founder of Stray Rescue Randy Grim, who combats multiple animal abuse cases on a weekly basis. "It has stricken our community to the core of our hearts, but I am inspired by how swiftly we have been able to respond to these awful cases. Brownie deserves justice."

Though St. Louis' Mayor Slay Animal Cruelty Task Force started in October 2012, the group has already made huge waves in animal cruelty law enforcement, having investigated over 100 cases, making over 25 arrests, and issuing over 300 animal control citations since October 1, 2012.

"This demonstrates again that we are serious about this," said Mayor Slay. "Our Animal Cruelty Task Force will continue to catch and arrest criminals who torture or hurt animals."

After discovering Brownie, there was a public outcry of support, frustration, and rage on Stray Rescue's social media page. Concerned citizens sympathized with the pain and suffering Brownie endured in his final days, with third degree burns covering his body and face.

"We see a ton of abuse cases, far too many, but the way in which Brownie suffered really struck a nerve with everyone," said Grim. "Our community is sick and tired of these horrific crimes, and animal abusers everywhere need to know their crimes won't be tolerated and you will be arrested."

Stray Rescue, a nonprofit, plays a critical role in the Task Force, often being the first responder to horrific abuse and neglect cases. The rescue and shelter organization, which also focuses heavily on community outreach and preventative programs, utilizes The Stracks Fund, their emergency medical fund, to help ensure dogs like Brownie have access to continuous medical care. The Stracks Fund was hit hard and depleted by the increase in abuse and heat-related cases this summer. Stray Rescue manages to push forward with the help of a compassionate, united animal-loving community. Donations are needed for this vital fund.

Stray Rescue reminds citizens that there are ordinances in place in many cities across the country regarding the tethering of dogs.

The Task Force is leading the way in St. Louis not only in the investigation, prosecution, and conviction of animal abuse and neglect, but also in tackling the problem from a preventative standpoint. It is not enough to put offenders in jail. The Task Force seeks to share information and resources, developing relationships with people in the community in order to end the cycle of abuse and offer help to those who truly want to see significant, lasting change in their neighborhoods.