We can't cover every bizarre thing Missouri State Senator Brian Nieves does online, but his latest Facebook activity was just too special to ignore. Earlier this month, the Republican lawmaker wrote about Governor Jay Nixon "b____ slapping the Constitution." And in April, he received national attention after we published his angry e-mail rants to a constituent who wanted to be removed from his Senate listserv.

This weekend, he decided to talk about his love of firearms with an "Only in America!!" story about a "gun that would give Nancy Pelosi instant indigestion..." An anonymous "Modern Day Patriot," he wrote, brought him a gun and his "personal Arsenal for me to look at and Drewel upon."

And there's plenty more to Drewel over in this Facebook post...including his "sincere" pondering over whether "liberalism is indeed a mental disorder."

Here's the photo Nieves posted on Friday of his .308 pistol.

Alongside the photo, he published this heartwarming American Story about some police officer who saw Nieves' guns and thought they were totally wonderful:

Nieves, who has a long history of really loving firearms, had a lot more to say in response to commenters on his page.

Two commenters at least were not pleased with the post, one referencing the Sandy Hook elementary school massacre last year that left twenty children dead: 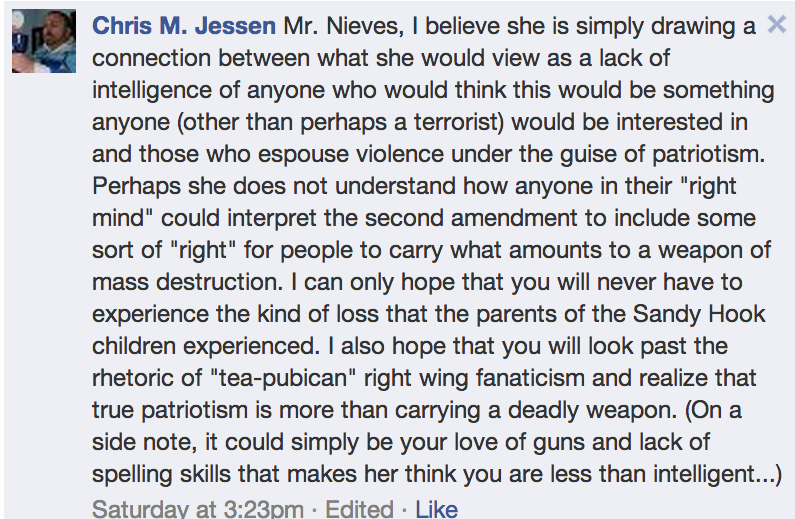 This launched a lengthy back-and-forth in which Nieves began to question his critic's views on abortion and eventually wonder aloud whether "liberalism" is a "mental disorder." Also RFT the "lib-rag" makes a cameo! Here's a selection of some of the comments below or you can read all of Nieves' remarks here. (Daily RFT sent an e-mail to Nieves this morning to see if he wanted to chat further about any of this. We'll update if we hear back).