Some Republican state lawmakers are still worried that a 1992 United Nations pledge for sustainable development could somehow be a threat here -- and they are now trying to pass vetoed legislation to ban the international policy agreement in Missouri.

The legislature got national attention this year for its passage one evening of three extreme conservative bills: One to block the federal government's gun laws, another to reject the law of Islam and a third to prohibit the U.N.'s so-called "Agenda 21," a non-binding pledge signed more than twenty years ago by leaders of 178 nations, including President George H. W. Bush.

Republican backers of the latter bill are hoping to drum up support for an override of Democratic Governor Jay Nixon's veto, with e-mails emphasizing that their effort is "NOT a conspiracy theory."

Rep. Lyle Rowland, one of the original lawmakers to sponsor the initiative, sent an e-mail to his colleagues in the legislature on Friday, urging them to help pass Senate Bill 265.

The legislation prohibits the state from "implementing any policy recommendations that infringe on private property rights without due process and are traceable to Agenda 21 adopted in 1992 by the United Nations..." 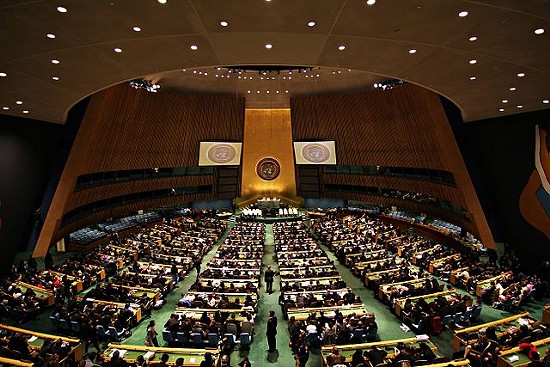 Supporters of the bill believe that government officials could use Agenda 21 -- which, again, is non-binding -- to infringe on the property rights of Missourians (with one constituent expressing concerns with St. Louis bike paths, for example).

It is fundamentally misguided and unnecessary to require local government officials to become international law experts in order to perform their duties. This legislation would spawn endless litigation frivolously attacking governmental action based on a belief that a two decades old United Nations resolution is somehow shaping decisions regarding such issues as health codes and road projects.... The premise of Senate Bill No. 265, to the extent it is discernible, is wrong and the solution it puts forth is worse.

Rowland, in his e-mail to colleagues last week, obtained by Daily RFT, says:

This message is intended to ask for your support in the veto override of SB265. We passed this bill with better than the super majority needed to override the veto and I am asking each of you to read the attached information statement that explains the subject of the bill. Thank you for your time and consideration on this extremely important issue. With the rescinding of the "White River Blueway" we know for certain this is NOT a conspiracy theory.

The "White River Blueway" is a reference to Interior Secretary Sally Jewell earlier this month rescinding a so-called "National Blueways System" designation for the river. After lawmakers expressed concerns that the designation -- aimed at boosting recreation and tourism -- could lead to unnecessary regulations or infringe on property rights, the feds removed the designation.

Opponents of Agenda 21 have argued that the Blueway designations are traceable to the U.N agreement . (You can read the Secretary of the Interior's announcement on the White River here and the letter of concern from lawmakers, including Senator Roy Blunt, here).

The attached letter Rowland includes in his e-mail is from Todd Isaac "Ike" Skelton, the founder of Missourians Against Agenda 21.

The bill in question passed 118-37 and lawmakers would have the opportunity in September to try and override the governor's veto. It's not certain yet whether they will have the votes to sign the measure into law.

Here's Skelton's full letter, followed by the full final version of the legislation.

Since 1993 the United States has seen an impressive push by various entities to control, regulate and establish all manners of organizations and extraordinary processes to comply with the tenants of United Nations Agenda 21; better known as "Sustainable Development or Going Green".

For years this process has garnered little attention from elected officials or the general public largely in part to a lack of information or understanding of just what these processes are and how they work. However, after countless hours of research, tracking and the simple fact that it takes many years to implement a plan, that if known by most Americans would be fully rejected; a picture of the implementation of Agenda 21 can clearly be seen.

Although many examples and encroachments of Agenda 21 can be pointed out; violations of private property rights are the most egregious example of how this broad "agenda" adversely effects Missourians. Most recently we've seen this example in the White River Watershed National Blueway designation. Yes, the Blueway system is directly traceable to the methods of regulation described in Agenda 21.

Certainly there are numerous encroachments by the Federal Government and gross overreach by various bureaucracy's on many levels. But, I cannot think of a single issue more harmful to the sovereignty of Missourians than Agenda 21. I humbly submit to your authority as elected representatives to stand firm in your commitment to protecting the liberties of your constituents by supporting a veto override of and support for SB265