Here's one really messy, destructive way to rob a store, courtesy of St. Louis' latest smash-and-grabbers who apparently did a lot of damage just before sunrise this morning.

Police say that three black males in dark baseball hats drove their vehicle into the rear brick wall of a National Rent to Own store in the Central West End, causing the alarm to sound at around 4:12 a.m. today.

Cops responded to the alarm, but not before the suspects allegedly drove off in their Silver Dodge Ram pickup truck they had used to do damage. With a bunch of stolen goods.

Police say they got away with seven flat-screen televisions and that another was found lying in the street.

The store is located at 334 North Sarah Street.

Here are some screengrabs of the damage from KTVI (Channel 2)'s coverage early this morning. 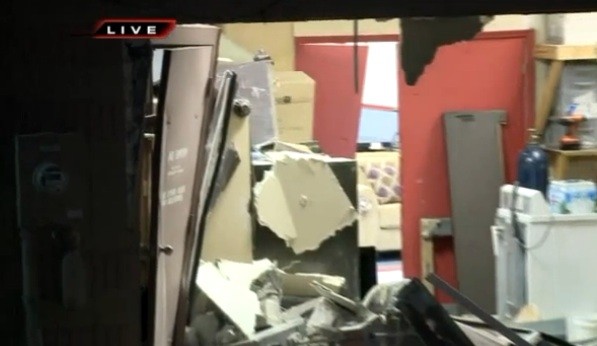 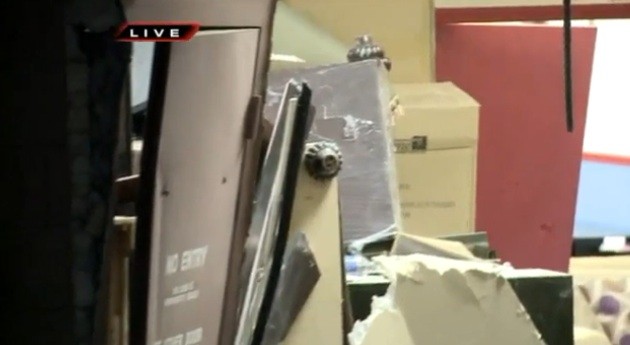 And the full report from police.

Incident: 2nd Degree Burglary (Business) Location: 334 N. Sarah Date/Time: 07/19/13 @ 4:12 a.m. Victim: National Rent to Own Suspects: 3 Black males, wearing dark colored Baseball caps Vehicles Used: Silver Dodge Ram pickup truck, dark colored (possibly green) Dodge Charger with a spoiler on the rear deck Officers responded to an alarm sounding at the National Rent to Own store. Investigation revealed a vehicle was used to ram the rear brick wall of the store. Seven flat screen televisions were stolen from the business. One television was recovered at the scene, lying in the street. The investigation is ongoing.