This week, we've been covering the controversy of Father Xiu Hui "Joseph" Jiang, a St. Louis priest facing criminal charges that he repeatedly molested a teenage girl. In the wake of a high-profile subpoena, supporters of Jiang -- who are not directly affiliated with the Archdiocese of St. Louis -- have spoken up in his defense, arguing he is innocent.

Now, Daily RFT has learned that the family of the teenage girl has filed a lawsuit against church leadership that includes a lot of new details about the alleged acts of abuse -- and accuses Archbishop Robert Carlson of breaking the law in his attempts to cover it up.

The suit, full document on view below, says Carlson was very close with Jiang and that after the priest confessed to him directly, the archbishop told the family he would only remove Jiang "if he 'had sex' with the child, but not for activities other than that."

The suit contains several shocking accusations along those lines about the church's handling of this case.

The suit -- which argues that Carlson is liable for the sexual abuse the victim suffered -- paints a picture of an unstable priest who got very close to the family and used his role as a religious leader to repeatedly assault the girl in her own home.

A spokeswoman for the Archdiocese, which received a copy of the suit yesterday, tells Daily RFT in an e-mail, "These new allegations against the Archdiocese of St. Louis and Archbishop Carlson are false and will be denied in an answer to the lawsuit filed in court."

Last year, when the charges first surfaced, Jiang -- an associate pastor at the Cathedral Basilica of St. Louis -- was placed on administrative leave. The church statement at the time said none of the conduct is alleged to have occurred at the cathedral or on any archdiocesan property.

Jiang is from China and prior to being ordained in St. Louis was a Catholic deacon in Michigan under the supervision of Carlson, who was a bishop there at the time. The suit says that Jiang moved to Missouri when Carlson did and that he lived in the Archbishop's private St. Louis home in a bedroom a few doors down from the archbishop. 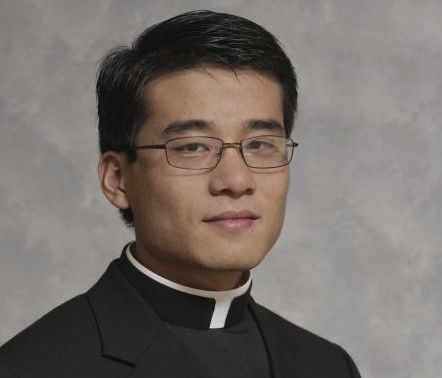 Jiang was 25 and the girl was fifteen when they first met, according to the suit, which says that the priest got very close to the family and regularly visited their Lincoln County home:

Father Jiang became very affectionate with Plaintiff. He would stroke her hair and hold her. He encouraged her to look "good" for him - like a young woman and not a child. He often bought her expensive gifts - like an expensive Coach purse. Plaintiff lost 25 pounds during this time and was upset about Jiang saying she should look like a woman and not a child. He told her that he was romantic and lonely.

After her parents expressed their concerns, the suit says, Jiang told church leaders, including Carlson, that he needed a reassignment and added that it was "personal."

But eventually he allegedly returned to the family's home, crying, and said, "I'm back."

"He said he could not stay away from the family," the suit says. That night he allegedly kissed the teenage girl and pinned her up against a wall. He returned on multiple occasions and "manipulated her into sexual contact...[using] scripture in order to convince the minor plaintiff that the contact was acceptable." He touched her breasts and genitals, used his hand to direct her hands to his genitals, touched her inappropriately in the parking lot of the church rectory and more, the suit says.

"Defendants Archdiocese and Archbishop knew Father Jiang was dangerous to children before the minor Plaintiff was abused," the suit continues.

When the parents discovered inappropriate e-mails, they confronted Jiang about the "abuse of their daughter and he admitted that it happened," the complaint says. He returned to the home and left a check for $20,000 on their car, texted the girl and said he left the money because of his "stupidity," according to the family. He also left her a voicemail saying he would return to China.

Continue for more on Carlson's alleged involvement and a full copy of the suit.

Carlson then called the family, the suit says, and told the parents that Jiang had admitted wrongdoing to him, but would only be removed if he had had sex with the girl. He then allegedly suggested to the parents that they give Jiang's check to him.

The suit says that this is "attempted tampering with evidence," which is a criminal offense.

The family is seeking compensatory and punitive damages and is demanding a jury trial. 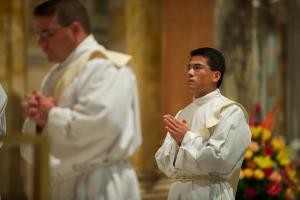 Chackes, who regularly handles sex abuse cases involving the church, says, "The extent of the Archbishop's involvement is unusual," adding, "He was so close to this priest."

"It's also unusual that a priest admits his wrongdoing and tries to pay the family," he says. "It does seem like a strong case."

Chackes says, "The most important thing is that Father Jiang be kept away from children and that the archdiocese should encourage anyone else who knows anything about this or who has been harmed by Father Jiang to come forward and go to the police."