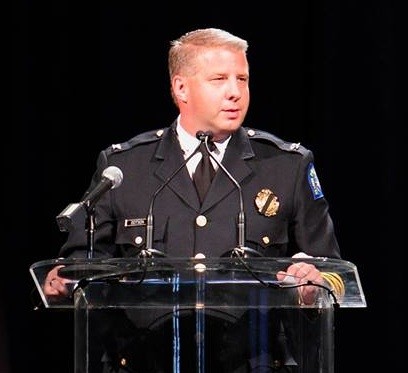 St. Louis Police Chief Sam Dotson says that crime is down in the city this year -- and he's optimistic about continued crime reductions moving forward.

Dotson, who stepped up to the position in January, gave a crime report through on 2013 statistics through June at the St. Louis Metropolitan Police Department's board meeting yesterday, noting that total crime is down 7.1 percent year-to-date and "crimes against persons" are down twenty percent.

And the negative perception of crime in the city, Dotson argued, is perpetuated by the media.

Here are some tweets from SLMPD on the crime reductions this year so far:

"Person crime is down 20.1 %," said @ChiefSLMPD. "We are very optimistic about further crime reductions in our city."

.@ChiefSLMPD is giving the crime report through June 2013. Total crime is down 7.1% year to date.

.@ChiefSLMPD talks about gun violence stats in #STL. "Crimes against persons are down 20%...but that's not enough." pic.twitter.com/6IjXIUR1Mv

Comparing the January to June 2013 data to the parallel 2012 data, we see that there have been drops in many areas.

Through June, there were a total of 58 homicides last year, and only 49 this year in the metro area (As of this writing today, the total homicide count for 2013 is 56).

In terms of total crimes through the first half of the year, there have been 12,430 incidents through June this year, compared to 13,387 last year.

Armed robberies, burglaries and auto thefts are also down.