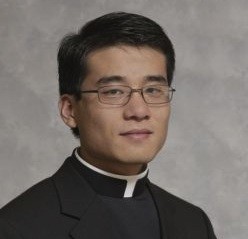 Earlier this week, local victims' rights advocates were outraged when they saw an invitation to a meet-up at the Cathedral Basilica of St. Louis to pray for the "defense and exoneration" of Father Xiu Hui "Joseph" Jiang, a priest accused of repeatedly molesting a teenage girl. Representatives of the Archdiocese of St. Louis said they were not aware of the event until Daily RFT reached out. They ultimately canceled it and had the meetup.com listing removed.

The organizers behind the event, however, went forward with the prayer last night, moving it to a private home. These churchgoers and supporters of Jiang emphasize that they are not affiliated with the archdiocese and have no gripes about church leaders' decision to cancel.

"We completely believe in his innocence," says Lucy Hannegan, who has known Jiang for years and has organized informal efforts to back him in the wake of the criminal charges. "We support him, and we stand behind him."

At the same time, leaders with the Survivors Network of those Abused by Priests -- the victims' rights organization that initially alerted us to the controversial prayer event -- are doubling down on their criticisms of those publicly supporting the accused priest, as well as the leadership of the archdiocese.

SNAP argues that it's hard to believe archdiocese officials didn't know about the event and that the leaders of the church have created this culture that is intimidating to victims and protects the accused.

"By publicly rallying around an arrested, charged and credibly accused child-molesting cleric, they're making it tougher on teens who are being abused and adults who have been abused to report offenders, help police and protect children," Judy Jones, assistant Midwest director of SNAP, says in a statement (full commentary on view below). "It's already tough to step forward if you are being or have been molested. It becomes much tougher, though, when churchgoers and church staff publicly disbelieve an alleged victim and back an alleged abuser."

Jiang was charged a year ago and faces allegations that he molested a teenage girl on four separate occasions (not on church property). His trial has been delayed several times, and Archbishop Robert Carlson has been subpoenaed to testify in the criminal investigation.

Hannegan says that once Jiang was charged, she began organizing a "Friends of Father Joseph" group that meets sporadically to pray for him. She says his supporters have met in the church before.

"We believe in his innocence, and we believe he is a good and holy man," she says.

Asked about criticisms from victims' rights groups, she says, "We pray for everybody in the judicial system. We pray for all priests.... We pray for justice."

She says the group prays for the accuser as well, adding, "It's up to the jury to decide.... We're not convicting anybody right now."

Of the archdiocese's decision to cancel yesterday's event at the cathedral, she says, "I completely understand their position. I have no bad feelings about that at all."

She adds of Jiang, "He's a good priest and a holy priest."

Court documents allege that Jiang attempted to pay the family off and say that he was a close family friend who went to the victim's home often. Archdiocese officials have not commented on the specifics of the criminal case as it is pending, and an attorney for Jiang did not respond to Daily RFT last week.

The archdiocese, in its statement to Daily RFT about the event, says that it would be "inappropriate for the Archdiocese to encourage prayer specifically for the exoneration of Fr. Jiang. We do pray for Fr. Jiang, as we pray for everyone involved in this situation. More specifically, we pray for justice and healing for all parties involved."

Here's the full commentary from Jones of SNAP, followed by the archdiocese's full statement to us about the originally planned prayer hour at the cathedral.

Those who commit child sex crimes are sick. They largely cannot help themselves.

Those who publicly back child sex offenders, however, are even more morally culpable. They deliberately choose to act in ways that hurt children. They should be ashamed of themselves.

This includes a group of young adults at the Cathedral parish. Tonight they were to hold a prayer service for Fr. Joseph Jiang. Fr. Jiang is accused of repeatedly molesting a girl last year. He's been arrested and charged.

And shame on their pastor, who claims he didn't know what was happening at his parish. Frankly, we find this hard to believe, especially since this event was apparently planned for months.

In a nutshell, here's our choice: we adults can either make it easier or make it harder to help victims and stop molesters. Cathedral parishioners and staff are making it harder.

By publicly rallying around an arrested, charged and credibly accused child molesting cleric, they're making it tougher on teens who are being abused and adults who have been abused to report offenders, help police, and protect children.

It's already tough to step forward if you are being or have been molested. It becomes much tougher, though, when church goers and church staff publicly disbelieve an alleged victim and back an alleged abuser.

"But Fr. Jiang hasn't been convicted, so don't we have the right to publicly speak out on his behalf?" some might add.

Of course Fr. Jiang's backers have the right to publicly support him. But they shouldn't.

Because it hurts kids. It scares victims. It silences witnesses. It intimidates whistleblowers. It makes it harder to prosecute all molesters. It makes it easier for those who commit and conceal to get by with and continue their reckless, hurtful, deceitful and self-serving wrongdoing.

Remember the evidence that has already surfaced in this case: text messages, voice mails, and a $20,000 check from the priest to the girl's family. And an arrest and two felony charges. This isn't an old "he said, she said" case.

Why does this "rally around the accused priest" scenario keep happening? Because Archbishop Carlson either doesn't care or secretly wants it. We suspect that Carlson likes playing "good cop" and taking the "high road" in abuse cases while his employees and parishioners play "bad cop." Carlson professes to care about abuse victims, while letting his underlings blast abuse victims.

Catholic dioceses now provide training for kids on how to stop abuse and for adults on how to spot abuse. Why not train people on how to act decently when abuse reports surface? Is it because that kind of training might actually help more victims step forward and cause the archdiocese more embarrassment when more child molesting clerics are exposed, arrested, charged and convicted?

Even Catholic officials admit that the overwhelming majority of child sex allegations against priests are legitimate (especially when criminal charges have been filed). Still if you want to believe Fr. Jiang is innocent, you certainly can. But remember this teenaged girl. What if she were your daughter?

And think of other boys and girls in the Cathedral parish and the St. Louis area who have been or are being sexually violated by coaches, teachers, parents or ministers. How will you feel if, years from now, one of them says "I would have spoken up sooner, but I saw how Cathedral parishioners backed Fr. Jiang, not his alleged victim, so I thought no one would believe me. Now I regret keeping quiet because my perpetrator has since assaulted other kids."

From an Archdiocese spokeswoman:

The leadership of the Archdiocese of St. Louis was unaware of this event until your inquiry. The young adult ministry group of the Cathedral Basilica of Saint Louis regularly meets for prayer on a bi-weekly basis, and this holy hour served in place of a regularly scheduled meeting. The Cathedral rector was aware that a holy hour was to take place, even that prayers would be offered for Fr. Joseph, but he was not aware of the express intention as phrased in the Meetup description. The holy hour has since been cancelled and the website taken down. It would be inappropriate for the Archdiocese to encourage prayer specifically for the exoneration of Fr. Jiang. We do pray for Fr. Jiang, as we pray for everyone involved in this situation. More specifically, we pray for justice and healing for all parties involved.