In announcing his veto of Missouri's Second Amendment Preservation Act, Governor Jay Nixon, a Democrat, argued that the state can't simply pass a law directly violating the United States Constitution. The proposal in question was a controversial effort to ban the enforcement of federal gun policies in Missouri -- legislation that GOP leaders may now try and pass with an override of Nixon's veto.

Since then, Daily RFT got a chance to speak with Dave Roland, a former Missouri attorney and political activist who helped craft the legislation in question. Roland argues that critics of the bill -- who say it is a clear violation of the Supremacy Clause -- don't understand the Constitution. In fact, he says, states do have a right to take a stand against the federal government in this exact manner.

"It can actually be effective when a group of states get together and say we are not going to tolerate it," Roland says. "I want to see states stand up for themselves and say we are not okay with this, particularly when it comes to the exercise of our constitutional freedoms."

The legislation, House Bill 436, introduced in the context of federal gun-control efforts, "rejects all federal acts that infringe on a Missouri citizens' rights under the Second Amendment of the United States Constitution." It would thus criminalize law enforcement officers -- even federal ones -- who attempt to enforce a federal law in Missouri that could be interpreted as an infringement on the right to bear arms.

Nixon's lengthy veto message (announced in a press release that listed his record on gun rights and pro-Second Amendment efforts) included background on the Supremacy Clause, saying, "Of course, an individual state is not empowered to determine which federal laws it will comply with, nor is it empowered to declare a federal act to be unconstitutional.... The doctrine of supremacy is as logically sound as it is legally well-established."

Nixon pointed out that nullification efforts have consistently failed in the courts and said, "House Bill No. 436 seeks to turn the hierarchy of our national framework of laws on its head..."

The veto of this bill, labeled one of the most extreme states' rights efforts in the country, prompted passionate backlash from some Republican lawmakers.

Roland, who was formerly the director of litigation at the Freedom Center of Missouri, a libertarian law firm, tells Daily RFT that he recommended the central philosophical language of the bill regarding constitutionality (roughly section 2, 1-8, on the first three pages).

"The Supremacy Clause says that federal laws are supreme as long as those laws are consistent with the Constitution," Roland, who is now the director of the Theodore L. Stiles Center for Liberty in Washington State, says. "The argument from the perspective of the General Assembly here would be that Congress simply does not have the Constitutional authority to create these gun control regulations."

He continues, "Gun control is not rightfully an exercise of Congress' commerce power."

Roland says that lawmakers approached him last year seeking his input on this legislation in the wake of the mass shootings that sparked President Barack Obama into action.

"They knew there was probably going to be a nationwide push to roll back some of the rights of self defense," he says. "So they asked me to consider some language that would kind of support or bolster an effort to make sure that Missourians were going to continue and enjoy their rights." 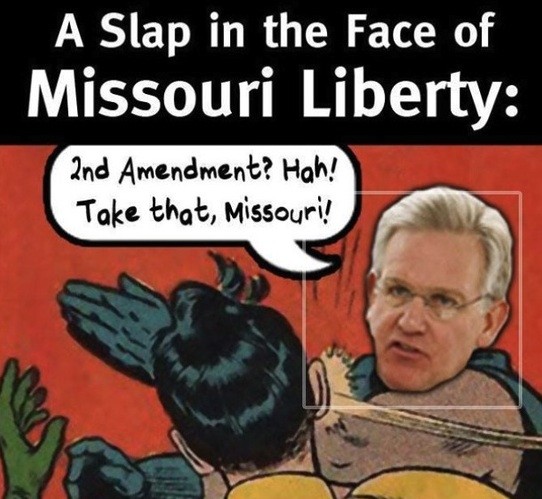 He says he borrowed heavily from Thomas Jefferson and James Madison (a point that Nixon directly addresses in his veto message).

Whenever the federal government assumes powers that the people did not grant it in the Constitution, its acts are unauthoritative, void, and of no force;...

The several states of the United States of America are not united on the principle of unlimited submission to their federal government. If the government created by the compact among the states were the exclusive or final judge of the extent of the powers granted to it by the Constitution, the federal government's discretion, and not the Constitution, would be the measure of those powers. To the contrary, as in all other cases of compacts among powers having no common judge, each party has an equal right to judge itself, as well as infractions of the mode and measure of redress.

Roland argues that states should pass these kinds of measures to push back against an overreach of the federal government.

"The real importance of something like this is trying to show how serious the state officials are in ensuring that they are going to protect the rights of their citizens," he says. "We really intend to make sure that our citizens' rights are protected, so watch your step."

He says states can and should refuse to enforce a federal law that is unconstitutional and that this can enact change (He cites "personal liberty laws" passed by U.S. states in the north to counter Fugitive Slave Acts).

"The idea of a bill like the Second Amendment Preservation Act is not to take this congressional law off the books, but rather it's almost a form of collective civil disobedience," he says.

He says he wants to see legislators override the veto, though admits that there are some problems with the bill, notably that one section -- that he says he had nothing to do with -- violates the First Amendment by criminalizing the publishing of gun owners' names.

In response to criticisms that this legislation would very likely cost Missouri a lot of money in legal battles with the federal government, Roland adds, "It's never a waste of money if someone is defending constitutional liberty."

Here's a copy of the bill and Nixon's full veto message.