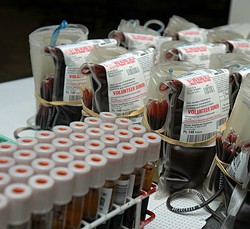 "It's not against the blood center, it's specifically against the FDA," says Caleb-Michael Files, a steering committee member of Human Rights Campaign-Kansas City. "We're encouraging people to donate."

The demonstration is part of a larger, national protest against the rule, which turns away any donor who admits he is a man who has sex with men.

Eric Jones -- the former Eagle Scout counselor who was fired from a Missouri Boy Scout camp for telling his boss he is gay -- attempted to give blood today, Files tells us. His experience was typical, he says: Jones provided proof that he is HIV negative, then took the intake survey. Once he indicated that he has had sex with men, he was told his donation would not be accepted.

"He was turned away and he had to sign a form stating he understood why," says Files.

The point of the day of action -- which is taking place today in cities all across the country -- is to show the FDA how many potential donors they are turning away with this rule, which was put into place during the very beginning of the HIV/AIDS epidemic in the early '80s. Since then, the campaign argues, HIV testing has vastly improved and denying healthy, HIV-negative men simply over their orientation is arcane and discriminatory.

"This particular center has less than a day-and-a-half supply of blood. That's really scary," says Files. "If homosexual men were able to donate it would increase the donation blood by about 50,000 donors."

The event is just the latest in gay-rights advocate and filmmaker Ryan James Yezak's project Second Class Citizens. Here's the promo he created for the Gay Blood Drive:

"I want to help others.... Being a blood donor is giving life," says Files, who says he hasn't been allowed to give blood since admitting his orientation at a high school drive. "It's really frustrating that because of who I love I can't give blood."

Although there is no organized effort here in St. Louis, the campaign is encouraging gay men to donate in their cities. Find more information here at GayBloodDrive.com.