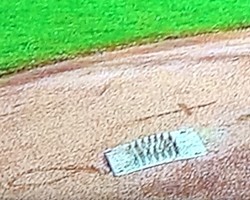 Last month, we published an article on the Christian imagery etched into the dirt on the pitcher's mound at Busch Stadium this season, after a disgruntled Cardinals fan sent Daily RFT a series of photos showing a cross and what appeared to be the fish symbol on the field. Our post has since gotten a fair amount of national media attention and a lot of angry comments from readers -- some who think this is a non-issue and others who believe the religious images are inappropriate on the baseball field in public view.

And now it seems the Cardinals took notice of the chatter and have officially ended the practice.

"Once we learned of it, I did contact the grounds crew and just asked that they don't," John Mozeliak, general manager, told the Post-Dispatch.

Indeed before the P-D posted its story over the weekend, Michael Vines, the Cardinals fan who originally sent us the images, alerted Daily RFT to the fact that there was no cross on the mound during Friday's game -- the first at home since his story made the rounds.

Vines had argued that it was wrong for a baseball stadium to display any sort of religious imagery.

"I am happy to report that there is no cross on the mound," Vines wrote to Daily RFT over the weekend.

And the P-D's article confirms that this is not just a fluke, but apparently some sort of formal policy change.

Citing its own column last month that included a short mention of the cross in the dirt, the paper says that Mozeliak has been in touch with Major League Baseball about the matter and that the club has decided to stop adding these images to the mound. He said:

It's just not club policy to be putting religious symbols on the playing field or throughout the ballpark. I didn't ask for the reason behind it. I just asked for it to stop....

If you want to stencil, "Stl," or something like that, that's fine, but that's not something we've asked anyone to do.

Below are more photos that Vines originally sent us along with his commentary that we published in our original post.

Continue for more photos and for Vines' letter.

Derrick Goold wrote a piece in StLToday.com (June 23, 2013) about a Christian cross etched into the dirt of the pitcher's mound at Busch Stadium. It was I who called attention to the cross, along with what I took to be the image of something commonly known as the "Jesus fish" also scratched into the mound. Goold says that the latter is the number "6", a tribute to Stan Musial. If so, it's a very oddly shaped "6" (see attached photo) and, considering its proximity to the cross, would seem to be serving a dual purpose.

Goold lead his piece with the headline "Mound Tribute," as if there were nothing inappropriate about displaying religious iconography on the infield at Busch Stadium, a place of hallowed ground not just for Christians, but for Cardinal fans of all religions, including none at all.

And there's this to consider. According to the Post (http://bit.ly/1caTLMW), team owners are the beneficiaries of ticket and real estate tax abatements that will save them $143 million in payments to the city over 25 years, as well as $54 million in state incentives and a $45 million county loan.

The team and stadium may be privately owned, but a they are civic institutions. Out of respect to a devoted and diverse fan base who also has some skin in the game, not to mention a diverse group of players, ownership has a responsibility and obligation to prohibit religious symbols of any kind from being placed in the field.