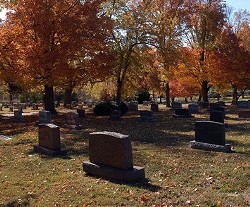 A father and son have admitted in court to their involvement in a massive funeral scam in which, federal authorities say, they cheated customers out of as much as $600 million as part of an ongoing Ponzi scheme.

We reported last month on the guilty plea of Sharon Province, a 69-year-old Ballwin resident and former employee of National Prearranged Services Inc., who confessed to mail fraud, wire fraud and misappropriation of insurance premiums. She could face up to three years in prison.

Both defendants pleaded guilty on Wednesday.

The father, Doug Cassity, was the owner of NPS and faces the most serious charges and stiffest possible sentencing.

Authorities say that between 1992 and 2008, NPS sold prearranged funeral contracts in a handful of states, including Missouri and Illinois, and the companies associated with NPS would issue life-insurance policies intended for these contracts. Customers would typically pay a large sum of money upfront, but then NPS would use these funds for unauthorized purposes and for the "personal enrichment of NPS's officers and others."

The new business for NPS eventually became the source of funding for funerals that previous customers had paid for in advance, officials charge.

Doug Cassity "admitted that he benefited from the misuse of customer funds," authorities say.

He faces up to ten years in prison for his role in the scheme after pleading guilty to wire fraud, bank fraud, mail fraud, money laundering and misappropriation of an insurance premium.

His son, Brent, also pleaded guilty to mail fraud, wire fraud and money laundering and also "willfully permitting [his father], whom he knew to have been convicted of a felony involving fraud or dishonesty, to exercise significant control over NPS's affiliated insurance companies."

The son was employed at various times by NPS and also served as a director of Lincoln Memorial Life Insurance Company, for which NPS served as a general agent, officials say.

Three other co-defendants are expected to stand trial starting in August.

In court, Cassity admitted that, beginning as early as 1992 and continuing until 2008, National Prearranged Services, Inc. ("NPS") sold prearranged funeral contracts in several states, including Missouri, Illinois, and Ohio. During that time, insurance companies affiliated with NPS, including Lincoln Memorial Life Insurance Company, issued life insurance policies related to those prearranged funeral contracts. As part of the contracts, the total price for funeral services and merchandise for an individual was agreed upon, and that price would remain constant regardless of when the funeral services and merchandise would be needed. Customers entering into prearranged funeral contracts would usually pay a single sum of money up-front to NPS either directly or through a funeral home that was also a party to the contract. NPS represented to individual customers, funeral homes, and state regulators that funds paid by customers under the prearranged funeral contracts would be kept in a secure trust or insurance policy as required under state law. Cassity admitted, however, that NPS made use of funds paid by customers in ways that were inconsistent both with its prior and continuing representations and with the applicable state laws and regulations. Cassity admitted that he benefitted from the misuse of customer funds.

Cassity will be sentenced on November 7, 2013. Earlier this month, Cassity's co-defendant Sharon Nekol Province pled guilty to six counts of mail fraud, wire fraud, and misappropriation of insurance premiums arising out of the same scheme. Also today, Defendant's co-defendant Brent Douglas Cassity pled guilty to participating in the same scheme. Cassity's co-defendants Randall K. Sutton, Howard A. Wittner, and David R. Wulf, are scheduled to appear for trial starting on August 5, 2013. As is always the case, charges do not constitute proof of guilt and every defendant is presumed to be innocent unless and until proven guilty.