As of yesterday, interest rates for new student loans will officially double, which, for some college students in Missouri, could prove to be particularly burdensome. Congress will meet again next week after the July 4 holiday and several organizations in St. Louis and across the state are working to increase pressure on local lawmakers to find a solution in Washington D.C.

"This rate hike would be really detrimental," Courtney Hayes, a 21-year-old senior at the University of Missouri St. Louis, tells Daily RFT last week. "And if it goes up, it's probably only going to go up from there." Hayes is an organizer with the UMSL chapter of a group called Young Activists United and has been helping coordinate recent student loan advocacy efforts.

If Congress does not come up with a fix, how would the doubled interest rate impact Missouri students?

The Subsidized Stafford loans in question -- which account for roughly 25 percent of all direct federal loans -- doubled yesterday from 3.4 percent to 6.8 percent. This could be a roughly $2,600 cost passed on to students, according to Congress' Joint Economic Committee, the Associated Press reports.

Hayes argues that inaction at this point is unacceptable and that at a non-traditional campus like UMSL, the damage of increased rates can be especially severe for first-generation college students, part-time students, low-income students and others.

"Taking out these student loans does cause a lot of anxiety," says Hayes, who is studying political science and hopes to go into union organizing after she graduates.

"I know I'm not going to make much money with that," she says of her career goals and personal concerns about doubled rates.

In her campaign to spread the word, Hayes says she has talked to many students who share these worries. "Most of their anxiety is being able to find a job and to pay off that debt. We know that jobs are scarce."

Hayes, who is from north St. Louis county, has been involved in the organization since November of last year and has been working on collaborating with other groups in Missouri and pushing a social media campaign to raise awareness.

Of Missouri lawmakers, she says, "They need to act and stand up for students in their state."

She notes that student loan debt has exceeded $1 trillion, a figure which makes the doubled rates all the more absurd. 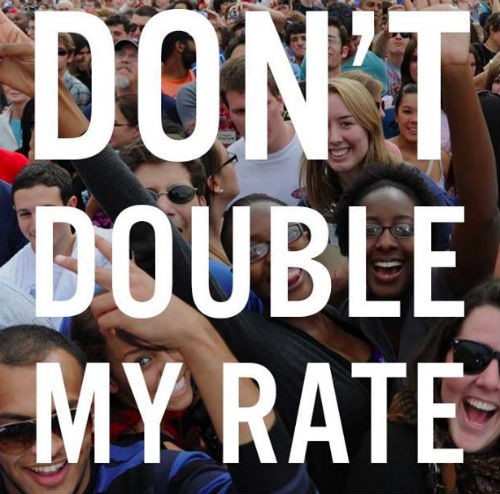 The Missouri Students Association in Columbia has also increased pressure on local lawmakers to avoid doubled rates. In a letter sent last week, Nick Droege, student body president, notes that the federal government extended subsidized loans to 13,761 University of Missouri-Columbia students in 2012 alone (according to the Missouri Coordinating Board for Higher Education). He writes in a letter to Congresswoman Vicky Hartzler:

These 'cheap' loans expand economic opportunity to many Missourians who otherwise would be trapped in a poor job market with nothing more than their high school degree.

Students at the University of Missouri recognize the harsh realities of sequestration and the tough environment that you and your colleagues in Washington D.C. face as you strive to find a solution to this problem. I, along with thousands of other students at the University of Missouri who I represent, support any bipartisan solution that will save our peers from an economic peril that threatens their ability to gain a higher education.

Here's another statistic via the social media campaign that Hayes is helping organize.

Meanwhile, Emily Koehler, a local organizer with Young Activists United St. Louis, traveled to the East Coast last week to participate in a meeting with Delaware-based Sallie Mae, the nation's largest student lender, which, she argues has aggressive debt collection practices and fees -- and has only fueled this crisis.

"Higher education is becoming the key ingredient to obtaining a high-paying career," Koehler, a recent UMSL graduate, tells Daily RFT. "For students, it's becoming more important than ever that they are able to access and pay for higher education."

Koehler, whose group was part of a coalition fo students meeting with the company, says that the executives of Sallie Mae were resistant to their ideas.

"It was a troubling meeting," she says. She argues that a private company like Sallie Mae, which contracts with the government to service loans, is driven by profit and does not prioritize helping students.

You can read more about the group's demands and perspective on the meeting last week here.

A Sallie Mae spokesperson sent Daily RFT a statement on the meeting, saying, "We were pleased to share how we help students graduate with less debt and how we modify loans to reduce interest rates for those who experience difficulty in repayment."

The Senate may debate this issue once again when it resumes on July 10.

Here's the full letter from the Missouri Students Association.