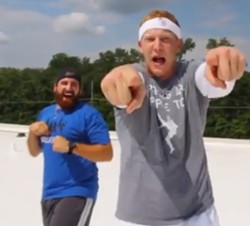 Now, the dudes have partnered with the St. Louis Rams for their very first NFL partnership -- and kicking edition!

It's a whole new level of trick shots, y'all. If you like watching football dudes be goofy and do pretty incredible tricks, take a break from your Tuesday morning and hit play:

"We were really excited to have the opportunity to come work with Johnny and Greg," Dude Perfect co-founder Coby Cotton says. "One of our most requested videos has been some type of kicking edition. We are not the most talented kickers so we knew we were going to need some help in that area. So Johnny and Greg are perfect for that."

The Dude Perfect crew apparently invaded Rams Park and worked with the two over a two-day period last month to film the video. The "YouTube must-watch," the Rams says, is when Zuerlein was asked to kick a field goal into a basketball hoop from just over 60 yards away.

The Rams social media team is quite pleased with the effort:

Between the @DudePerfect video and now a four-year extension, it's safe to say @JakeMcQuaide is having a great day. #Rams