Theresa Fortner, a 49-year-old Arnold woman, was sentenced today to twelve-and-a-half years behind bars for the death of her baby granddaughter in a drunk-driving crash two years ago.

On July 4, 2011 at around 9 a.m., the woman put her 20-month-old granddaughter into her car and drove from Arnold to St. Louis -- even though a family member tried to stop her, authorities say.

Witnesses said the woman was driving so fast on I-55, that her "wheels on the driver's side were not touching the ground."

Eventually, she crashed into a street sign, a house, a tree and a fence and landed upside down.

The grandmother and the girl, Bella Houston, were rushed to the hospital, but the baby's wounds were too severe. A day later, Houston was pronounced dead after suffering blunt force trauma resulting in a skull fracture, brain swelling and brain bleeding.

The woman's blood alcohol level was .226, more than double the .08 legal limit. Police believe she was traveling at nearly 70 miles per hour when the crash happened and never even applied her brakes. 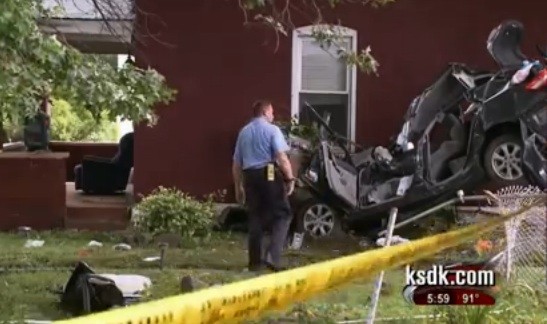 The circuit attorney's office had recommended that she be sentenced to twenty years in prison, but today she received a lighter sentence.