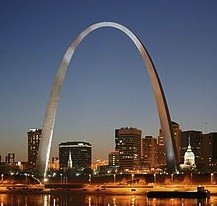 A majority of St. Louis city residents have a "very unfavorable" view of East St. Louis -- but they are fans of Clayton!

A representative from the mayor's office tells us that the poll comes from 1,480 responses. The votes are varied but the disdain for East St. Louis is clear. Graphs below!

Here are the East St. Louis results, which say that 77 percent of respondents view the city across the river "very unfavorably." And only two percent view it "very favorably" and three percent "mostly favorably."

And here are the Clayton results, which are essentially reversed:

It's worth noting that there is probably no way to know exactly where these votes are coming from, though twenty percent of respondents say they currently live in one of the municipalities mentioned in the poll.

Residents are pretty mixed when it comes to the potential for combined services between the city and these neighboring municipalities:

And here are more results regarding other cities:

Continue for results on other cities, including Granite City, Affton, University City and more!

Apropos of Nothing News