Update: St. Louis metro police officials have released new information on the suspect involved in the deadly shooting in broad daylight on Monday late morning. Our original coverage is below. Anthony Clark, 28, was killed outside of his home at the 5000 block of Cote Brilliante Avenue in the Ville neighborhood in north St. Louis -- when a masked gunman fired shots into a car where the victim was sitting in the passenger seat, police sa.

Below are photos of the vehicle wanted in connection with the homicide (the 46th this year in the city of St. Louis). The car is a newer model, dark green, four-door Audi A-6 with heavily tinted windows and with a U.S. government license plate #G122335K.

Police say it was stolen from St. Louis city.

An unknown black male exited the vehicle with a white bandana concealing his face -- and opened fire with a black assault rifle, hitting Clark multiple times. He died at a hospital a short while later.

Here are the photos of the suspect vehicle followed by our original post on the deadly shooting. 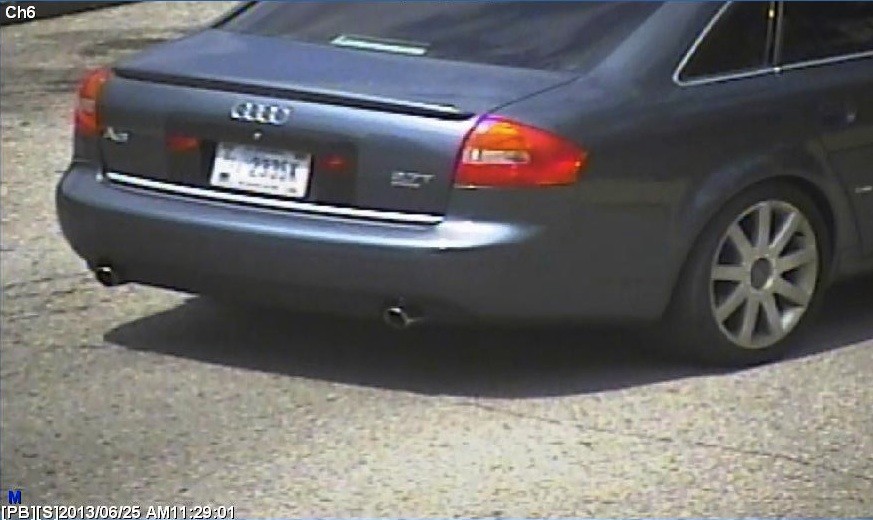 Original post: Wednesday, June 26, 8 a.m.: Around 11:30 a.m. yesterday, a masked gunman in St. Louis approached a vehicle and fired shots from a rifle at a man sitting in the passenger seat.

The victim, whom police identified as 28-year-old Anthony Clark, was hit multiple times and taken to the hospital where he was pronounced dead less than two hours later.

Meanwhile, the suspect remains unknown and at large after fleeing from the murder scene in a blue Audi A6.

The shooting happened on the block where Clark lived, police say.

The incident took place at the 5000 block of Cote Brilliante Avenue in the Ville neighborhood in north St. Louis.

Officials are urging anyone with information about this incident to call CrimeStoppers at 866-371-TIPS.

Cops have no further details about the shooter other than the fact that he was masked and fled after firing bullets into the car.