It doesn't matter what the United States Supreme Court has to say about marriage, God still thinks it should only be between a man and a woman!

So says the Archdiocese of St. Louis, which was very quick to jump on today's landmark decision that the Defense of Marriage Act -- the law denying federal benefits to same-sex couples -- is unconstitutional.

"The Supreme Court's decision to strike down the federal Defense of Marriage Act (DOMA)...does not change the reality of marriage, nor does it change the Archdiocese of St. Louis's responsibility to defend marriage as being between one man and one woman," the archdiocese says in a statement. "It is important to note that marriage predates both the U.S. government and Western civilization."

After news broke this morning, Daily RFT's inbox was filled with press releases and statements from local St. Louis and Missouri groups and officials reacting to the decision.

The archdiocese's standout (and very unsurprising) criticism is headlined "The reality of God's definition of marriage cannot be changed."

But don't worry, nothing wrong with being attracted to the same sex! So says the archdiocese in its statement today:

The Catholic Church does not condemn individuals for having same-sex attraction. She teaches that all people are called to responsibility regarding sexuality. The sexual union of a man and woman, when not obstructed by contraceptives, is the kind that is open to life even if new life is not the result.

We understand that married persons imitate the way Christ offers His body completely and permanently to the Church so that we might have life, and have it abundantly. This truth is written into our bodies as well as on the pages of the Old and New Testaments. While the law can allow other things to be called marriage, it cannot make them into the kind of union that is marriage.

You can read the whole statement here if you are so inclined. (Here's another condemning statement from Missouri Congresswoman Vicky Hartzler, if you're looking for that sort of thing). 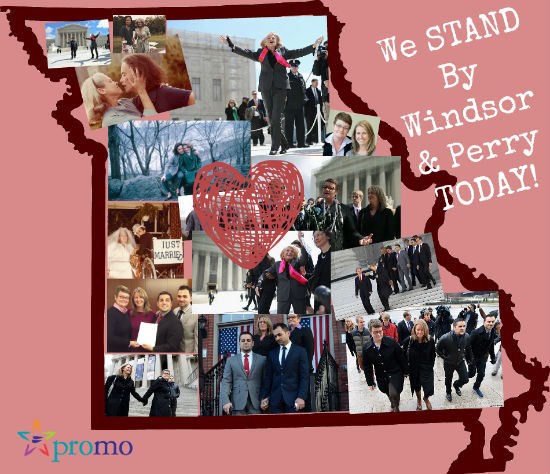 PROMO, Missouri's statewide LGBT advocacy group, sent out a statement praising the decision and noting that there's still a long way to go in Missouri where voters banned gay marriage back in 2004:

A historic moment for the United States of America, today's ruling means married gay and lesbian couples are recognized federally and couples may once again marry in California again. Some federal benefits that will affect these couples include military family benefits, social security benefits, multiple tax categories, hospital visitation rights, and healthcare benefits.

A.J. Bockelman, executive director of PROMO, adds in a statement, "Understanding the impact on Missouri will take a bit of time, but rest assured, we will continue to fight for justice on behalf of the community in everything from basic protections to marriage rights."

The American Civil Liberties Union of Eastern Missouri says that the decision at the very least would pressure the Missouri Supreme Court to vote in favor of same-sex benefits (referencing the ongoing fight of Kelly Glossip whose partner was a state trooper that died on the job).

"Today's U.S. Supreme Court decision striking down DOMA highlights the unfairness of Missouri laws that mandate unequal treatment of same-sex couples and their families," Tony Rothert, legal director of the ACLU-EM, says in a statement. "It increases our optimism that the Missouri Supreme Court will honor the commitment between Kelly Glossip and Dennis Engelhard and Corporal Engelhard's service to the people of this state for whom he gave his life." 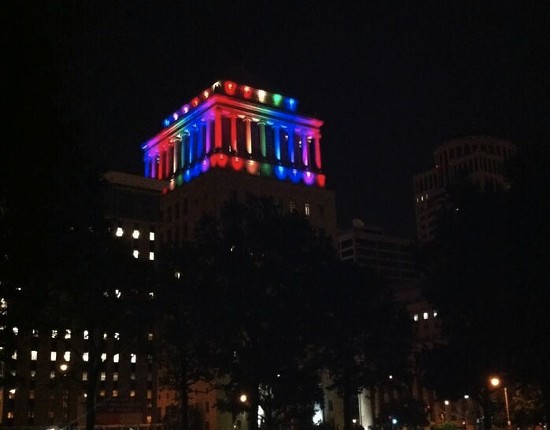 And here's a message Mayor Francis Slay posted on Facebook today, saying that the Pride festivities this weekend are likely to be extra festive:

The Civil Courts building was wearing a rainbow of lights last night. A rainbow banner hangs beneath the City flag on the lawn outside my window. Crews are beginning to shape the route for a downtown parade and celebration. All, proudly.

This is the background against which I learned this morning of the United States Supreme Court's decisions striking down some of the barriers against full civil rights for gay and lesbian Americans.

In 2009, I was one of the mayors who voted to commit the US Conference of Mayors to supporting marriage equality for same-sex couples so that such unions would have the same rights - family leave, retirement benefits, tax equity, and constitutional protection against discrimination - as heterosexual couples. Last year, I joined the mayors of nearly 100 US cities in a proactive campaign in support of the freedom of gay and lesbian couples to marry and to enjoy the full rights of married couples.

I said then, and I repeat it now: this is not only a matter of fairness (though it is certainly that). Cities are strengthened by their families. I want St. Louis to be the sort of diverse and open place in which all families, gay and straight, choose to live, create, and build businesses.

As residents of Missouri, we have some work to do. KC's Mayor Sly James is already an ally.

There will quite a party in St. Louis this weekend. We will be celebrating with PRIDE.