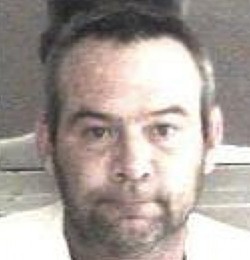 Today in the you-can't-make-this-stuff-up department, we bring you the story of John Lewis Summers Jr., a 45-year-old Missouri man who reportedly responded in a violent and bizarre fashion when a teenager asked him a seemingly harmless question.

Elsberry police officials say that a thirteen-year-old boy and two older friends offered to mow Summers' lawn for $20, which, for some inexplicable reason, prompted the man to totally wig out -- and force the boy to take a shot of vodka.

Then, police say, he kicked the young boy in the ribs and later attacked two police officers investigating the strange assault.

The Post-Dispatch reports that Summers not only forced the boy to drink alcohol and kicked him, but he also "tried to stab him in the feet with a knife."

Apparently not satisfied with the attack on the boy looking to cut some grass, he pulled a knife on the officers when they arrived, the paper says.

Then, he allegedly grabbed one of the officer's guns and tried to get it out of its holster.

At this point, police reportedly were able to subdue Summers and took him into custody.

The man, who lives on Ellis Avenue in the Lincoln County city, is now facing two counts of misdemeanor assault and a third charge of disarming a cop.