In the chaos of last week's violence, one suspect who allegedly fled cops and then crashed into an officer was taken to the hospital for treatment. Then he got away.

Police officials now say they have once again apprehended the 27-year-old man named Charles Freeman -- and have filed formal charges against him. The probable cause statement, on view below, outlines the six counts he is facing and also offers some new details on the high-speed chase and the injuries suffered during the crash -- amid an unusually tense and violent week for the St. Louis city cops.

Freeman is behind bars, facing charges of second-degree assault on a law enforcement officer, unlawful possession of a firearm, resisting a lawful stop, first-degree tampering with a motor vehicle, resisting arrest -- and more.

As we reported last week, on Tuesday night -- just one day after a particularly violent evening involving seven different shootings -- police engaged in multiple pursuits with suspects throughout the city.

In one case, a cop faced an ambush from suspects who fired straight at him. Police have since made arrests in connection to this incident. 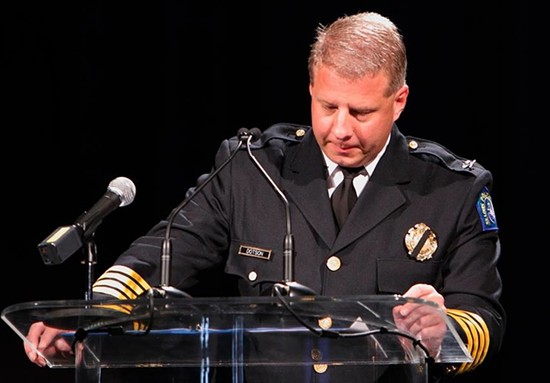 In a separate incident, a suspect fleeing cops crashed into a 9th District cop car at Compton Avenue and Washington Boulevard:

9th District PO injured in vehicle crash @ Compton & Washington tonight. He was responding to an aide call. Officer is in serious condition

This suspect and the injured officer both went to the hospital, but the man, now identified as Freeman, inexplicably walked away.

"I'm bitterly disappointed to report that one suspect escaped from his hospital room due to inadequate security on our part," Dotson said on Monday. "The suspect is back in custody. We have reviewed our protocols and practices."

And now he's been charged.

The probable cause statement says that Freeman sped off when a sergeant tried to conduct a traffic stop on the vehicle, which was not displaying proper license plates.

He then allegedly swerved into oncoming traffic around several other vehicles and was apparently driving so fast the sergeant couldn't keep up.

Meanwhile, a second officer soon attempted to stop Freeman at which point the defendant's car crashed into his.

When the cops approached him, he was sitting in the driver's seat holding a gun. He ignored commands to put the weapon down and show his hands -- and instead tried to flee again, the charges say.

Even as officers were apprehending him, he began kicking at them in an attempt once again to escape, the report says.

The officer required medical attention, but his injuries were apparently less severe than the injuries of a passenger in Freeman's car who was reportedly ejected from the vehicle during the crash and suffered broken bones, bleeding in the brain and large lacerations.

Here's the full probable cause statement.