Illinois is the only state in the country that has a ban on concealed-carry and though a U.S. Circuit Court of Appeals has ruled the law unconstitutional, the fight continues to drag on. Illinois Attorney General Lisa Madigan, a Democrat, has requested a second extension, on view below, that would give her more time to decide whether to appeal the case to the United States Supreme Court.

Madigan's office says that this is a request simply to keep the state's legal options open, but the move means the uncertainty around the legality of carrying firearms in Illinois could continue for longer than expected. Across the river from St. Louis, law enforcement officials have in recent weeks given contradictory statements about the state of firearm laws in Illinois, with the top prosecutor in Madison County saying he won't enforce an unconstitutional ban on concealed-carry anymore while many other agencies, including Illinois State Police, have emphasized that it remains illegal to carry firearms.

Daily RFT recently spoke to the mayor of East St. Louis who told us that while he has opposed allowing concealed-carry in the past -- and fears that more guns on the street could increase violence -- he is prepared to fully enforce and support any new law that Illinois adopts.

The state legislature in Illinois has passed a concealed-carry bill, but the governor still has to sign it into law and could veto the measure. Lawmakers drafted and passed this bill -- which would allow those with the proper permits to carry loaded firearms on them and in their cars -- on the heels of a 7th U.S. Circuit Court of Appeals' ruling last year, declaring the state ban on concealed-carry unconstitutional. 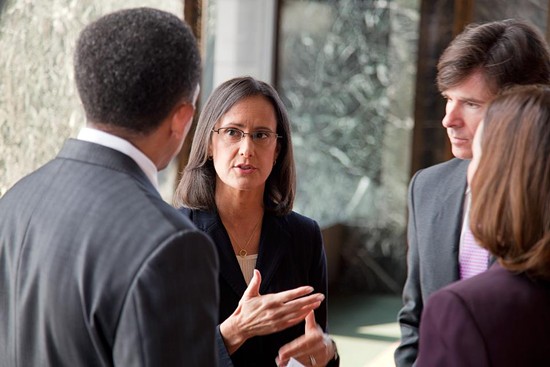 At this point, there are several different possible outcomes. The concealed-carry bill could be signed into law if Governor Pat Quinn approves it or if the General Assembly overrides a veto. If he refuses to sign it and lawmakers are unable to override his veto, then Illinois would have to implement some form of constitutional carry in response to the court ruling. In this case, home-rule cities might enact their own laws, which then might face their their own legal battles.

Another option is that Madigan appeals the decision to the Supreme Court. She previously received an extension until June 24 to challenge the ruling and in this latest request is looking for a second delay until July 24.

In an e-mail to Daily RFT, Natalie Bauer, a spokeswoman for Madigan, says, "We sought the extension because the Governor has not indicated what he intends to do with the bill passed by the legislature in response to the 7th Circuit decision, and we needed to take action to keep the state's legal options open."

The June 14 request says Illinois is asking for a "second and final thirty-day extension of time." The filing also says:

The Seventh Circuit held that the Second Amendment bars Illinois from prohibiting law-abiding citizens from carrying loaded handguns in most public places. As petitioners detailed in their initial extension motion, attached hereto, the Seventh Circuit's decision is "in conflict with the decision of another United States court of appeals on the same important matter..."

Here's the full request, via: