Update below: A seventeen-year-old male who fled the scene of a crash that killed a two-year-old boy Sunday night has turned himself in, St. Louis county cops say. Charges are expected later today. Our original coverage of the accident is below.

Police spokesman Randy Vaughn tells Daily RFT that the suspect who fled in an SUV -- which he later abandoned in the city -- showed up to the police department yesterday and confessed, saying that he tried to avoid hitting the boy. He also said, "The reason I left was because I was scared," Vaughn says.

Meanwhile, the family of two-year-old Darion* Griffin is grieving after the Spanish Lake crash left him dead at a hospital shortly after the collision and also injured his seventeen-year-old aunt who tried to rescue him.

The teenage suspect is currently in custody after turning himself in at the Moline Acres Police Department. Warrants should be issued early this afternoon, police say.

Police yesterday were able to locate the 2013 White Dodge Durango at the 4400 block of Carter Avenue in the Penrose neighborhood. Soon after that, the suspect came in and confessed.

Police officials have not yet identified the suspect or offered details about where he is from or what charges he might face.

Some neighbors witnessed the gruesome crash.

"The car was coming down, and boom, he was underneath," one neighbor told the Post-Dispatch. "It ran him over, and people were screaming."

The suspect turned himself in after Griffin's mourning grandmother Alexandria Goree pleaded via the media for the driver responsible for the boy's death to come forward.

Update 2, 1:19 p.m.: County police have just issued charges against the seventeen-year-old suspect, which officials have now identified as Charles Guice, who lives on Nemnich Avenue in north county. 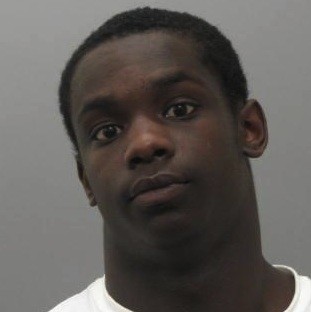 Guice was charged with one count of leaving the scene of an accident, which is a class D felony. A $50,000 bond was set, police say.

*Correction: An earlier version of this post incorrectly spelled the victim's name based on an error in an early police report.

Continue below for our original coverage of the crash.

A driver in north county last night killed a two-year-old boy -- and then fled the scene of the accident, police say.

Officers of the north-county precinct are searching for a white SUV that reportedly drove off after speeding into Darion Griffin who was attempting to cross the street to play with his seventeen-year-old sister. The crash happened on Redman Avenue near Bellefontaine Road in Spanish Lake at 8:11 p.m., police say, noting that the driver was last seen turning south on Raymond Avenue. His sister was also reportedly struck while trying to rescue her brother.

The two were both rushed to a nearby hospital where the boy was pronounced dead. The girl, police say, suffered minor injuries.

As of late last night, the street was shut down as cops were investigating the hit-and-run at the 1500 block of Redman.

Police say the vehicle is a newer model white SUV, possibly a Dodge or Ford, with heavy tinted windows, chrome side step rails and damage to the right front bumper.