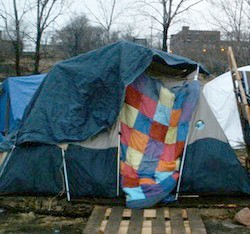 Last week, the city of St. Louis shut down a homeless riverfront encampment that officials say had become a dangerous environment for the 24 people living there. And the homeless individuals sleeping in tents on 2nd and Plum streets -- at the so-called "Camp Plum" -- have all been relocated to some sort of housing, according to the city's department of human services.

"This is really part of a bigger effort on our part to try to provide permanent supportive housing for all the [chronically homeless] people in the city of St. Louis," Bill Siedhoff, director of human services, tells Daily RFT. "Some of the people haven't been in their own homes in years.... They were so excited to have things we take for granted -- a bathroom, a kitchen, a bed. Those kinds of things are so fundamental."

Siedhoff says that since the camp was officially cleared out on Friday, no homeless people have returned.

This shutdown comes after the city last year vacated an encampment north of the Arch grounds called Hopeville. The city says that there are a range of hazards that arise in these settings and that it's important that officials work to move these people indoors.

"We'll be monitoring that pretty carefully," Siedhoff says, noting that the city will look to stop any additional encampments that may form this summer. "When there's the beginning of an encampment...we will intervene immediately and engage them."

His agency has been working for months to prepare for this latest shutdown and he tells us that all 24 of the people living at Camp Plum have secured stable housing.

In recent weeks, there have been increasing concerns about this new camp, in part due to a fire that ignited on site.

"It's very combustible in terms of people interacting in a way that's very dangerous," he says, noting that many of the chronically homeless individuals in the city struggle with mental health and other problems.

Though this can sometimes make it challenging to connect people to housing and services, in this latest camp closure, Siedhoff says, "We haven't found people who are resistant to help."

The city has placed them in housing and will pay for rent and utilities as part of a federal emergency shelter grant.

He emphasizes that St. Louis -- unlike some other cities across the country -- chooses not to arrest homeless people living in these kinds of encampments.

"What you do then is just build up hostility and put people in even worse circumstances," he says. "The more humane and decent thing to do is to work with people to get them out of these circumstances.... [In other cities], some very punitive measures are taken to deal with this kind of thing. We don't believe in doing that and don't intend on doing that."

He adds of last week's move, "The people were very happy to leave that location."

This effort, he notes, is part of a larger project to end chronic homelessness in the city, called "The Beginning of the End: Abolishing Chronic Homelessness," or the BEACH Project. The city says that, as of the latest count in January, there are 138 chronically homeless people in St. Louis. This refers to individuals who have been homeless for more than a year or have had four episodes of homelessness in the last three years. The 24 at Camp Plum fall in this category.

The city aims to connect all of these individuals to housing by the end of the year.

"This is a hard population to reach in some cases, because they are scattered," Siedhoff says, but adds, "We think we're on the cusp of ending chronic homelessness."

In a statement on the closure, Mayor Francis Slay says, "The solution to ending homelessness is not tent cities or temporary encampments, as they are not safe or humane places. Instead we want people to have a stable and healthy place to live, and that's what we are doing for the encampment residents."