After a particularly bloody night on Monday -- with eighteen people injured during seven separate incidents of crime in St. Louis -- the metro police department vowed to increase patrols the following night throughout the city in an effort to curb the violence.

The extra help was apparently very much needed.

As we reported yesterday, a 52-year-old officer, who we now know was on special patrol Tuesday night, faced a violent ambush from a shooter who he says looked him straight in the eye -- and began firing bullets. Police officials announced late last night that they had charged two men in connection with this shooting, after another crime-filled day in the city that put many cops in danger.

The Post-Dispatch has a close look on page one today at the shooting from the perspective of Major Joseph Spiess who was among a dozen top commanders helping supplement patrols after the intense violence the previous night.

Spiess, 52, was driving by himself, in uniform, in his unmarked Chevrolet Impala at around 9:30 p.m. when he saw a black Pontiac Bonneville with temporary license tags. The P-D has this account from Spiess, who says he has never in his 24-year career experienced an ambush like this:

He looks me dead in the eye, lifts his pistol and starts shooting at me. The first round sounded like a shotgun went off in my car. Then I heard a high-pitched whine go through the (open) driver's side window and out the passenger window.

He looked at me square in the face, I'm in an Impala, wearing a police shirt, and he was looking me right in the eye. He knew who he was shooting at. He absolutely knew I was a policeman...

As the officer sped away, he could see the gunman in his mirror step into the middle of the street -- and continue firing. 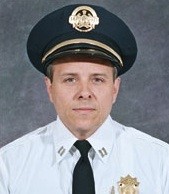 "I remember thinking, 'I have to be hit,'" he told the paper. "I could not believe I wasn't hit."

The official report -- probable cause statements on view below -- says that Vanarsdale was driving the car and in his initial attempt to escape the cop, sped away in excess of 90 miles per hour on a residential street. "People were on the sidewalk and street as defendant drove," the report says.

Simmons, a passenger in that car, shortly thereafter, emerged from between two parked cars and started firing at Spiess, the charges say. He shot into the driver's side door and then later stood in the middle of the street and continued shooting.

The cop car was hit two times, but it appears many more bullets were fired. Spiess, miraculously it seems, was uninjured.

Meanwhile, as we noted yesterday, in an entirely separate police chase, an officer was badly hurt in a crash with a suspect -- who afterwards managed to escape from the hospital.

As of this writing, no word on whether cops have apprehended him.

Here's the SLMPD incident report for the shooting involving Spiess, followed by the probable cause statements against Simmons and Vanarsdale:

Incident: Assault 1st
Location: 4200 block of W. Evans
Date/Time: 06/11/13 @ 9:22 p.m.
Victim: 52-year old white male -St. Louis Police Officer
Suspect: Black male
At approximately 9:22 pm, a Special Operations Commander observed a vehicle and made a u-turn, activated his lights and siren on his unmarked Chevrolet Impala and attempted to conduct a car stop on a black Pontiac Bonneville with temporary tags; however the vehicle sped away. As the commander followed the vehicle's path, he was shot at by the driver of the vehicle. An "Officer in Need of Aid" was initiated at this time. A witness advised police that the suspect who shot at the commander fled into a residence in the 4200 block of W. Evans. Three handguns were recovered from that residence, and three males were arrested from inside. The black Pontiac Bonneville was located abandoned in the south alley of the 4200 block of Cook. No injuries were reported. The investigation is ongoing.